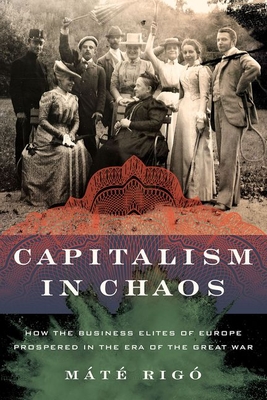 By Máté Rigó
Email or call for price

Capitalism in Chaos explores an often-overlooked consequence and paradox of the First World War--the prosperity of business elites and bankers in service of the war effort during the destruction of capital and wealth by belligerent armies. This study of business life amid war and massive geopolitical changes follows industrialists and policymakers in Central Europe as the region became crucially important for German and subsequently French plans of economic and geopolitical expansion in the late nineteenth and early twentieth centuries.

Based on extensive research in sixteen archives, five languages, and four states, M t Rig demonstrates that wartime destruction and the birth of "war millionaires" were two sides of the same coin. Despite the recent centenaries of the Great War and the Versailles peace treaties, knowledge of the overall impact of war and border changes on business life remains sporadic, based on scant statistics and misleading national foci. Consequently, most histories remain wedded to the viewpoint of national governments and commercial connections across national borders.

Capitalism in Chaos changes the static historical perspective by presenting Europe's East as the economic engine of the continent. Rig accomplishes this paradigm shift by focusing on both supranational regions--including East-Central and Western Europe--as well as the eastern and western peripheries of Central Europe, Alsace-Lorraine and Transylvania, from the 1870s until the 1920s. As a result, Capitalism in Chaos offers a concrete, lively history of economics during major world crises, with a contemporary consciousness toward inequality and disparity during a time of collapse.