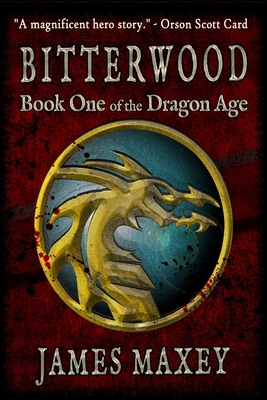 Epic war between dragons and mankind Dragons rule the world, united under the powerful Dragon King. Humans serve as dragons' slaves, pets, and prey. One man, the mysterious Bitterwood, strikes at dragons from the shadows, fighting a long, lonely war of resistance. When Bitterwood is kills the Dragon King's son, the king vow to rid the world of the legendary dragon-slayer-even if he must kill all of mankind to do so. This new edition of Bitterwood has been revised and updated from the original paperback release. "A magnificent hero story." - Orson Scott Card
"For the sake of humanity, join in Bitterwood's revolt." - Kirkus Reviews
"A grabber from page one, a smart tale of adventure and revenge sprinkled with echoes of our own dangerous times. James Maxey's world of dragons and humans at war is so solidly and engagingly rendered that I never wanted to leave." - John Marco
"Bitterwood is an unlikely hero in a rich world, with a rich history that holds many surprises. James Maxey tells his story with a sure hand. Enjoy the journey " - Carrie Vaughn
"Fine action and cool world building. Anne McCaffrey through a mirror darkly." - E. E. Knight.