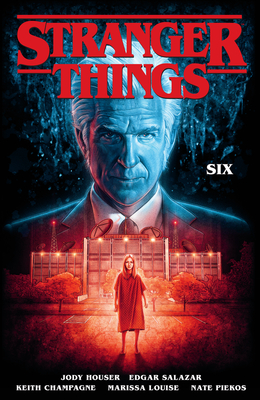 A prequel comic from Netflix' award-winning series, delving into the mysterious workings of Project MKUltra and the weird science that opened the door to the Upside Down.

Francine, a teenage girl with precognition, has struggled through a lifetime of exploitation: first by her parents, then by Dr. Brenner of Hawkins Laboratory. Dr. Brenner wants to harness her powers as well as those of the other gifted children that they hold captive at the lab. Wracked by increasingly disturbing visions, she sees an opportunity for her and all the children to escape. But at what cost?

From the pen of Jody Houser (Faith, CMYK: Magenta, Max Ride: Ultimate Flight) and featuring art from Edgar Salazar and Keith Champagne (Black Panther), Stranger Things comics is essential reading for fans of the hit Netflix series as well as fans of the urban fantasy and horror genres in general.

Jody Houser decided she wanted to be a writer when she was eight years old and never looked back. For better or worse, no one ever suggested that she stop. She earned her MFA in Creative Writing at Emerson College in Boston, where she completed her master's thesis in screenwriting and was a winner of the Rod Parker Fellowship for Playwriting.

Starting in 2006, Jody began experimenting with webcomics. She is the creator behind the webcomic Cupcake POW!, which launched in 2010 and is currently available on ComiXology.

Jody has written Faith for Valiant Comics, Max Ride: Ultimate Flight and Agent May for Marvel, and Orphan Black for IDW. She has been a contributing writer to numerous comic anthologies including Avengers: No More Bullying, Vertigo CMYK: Magenta, and both Womanthology series.