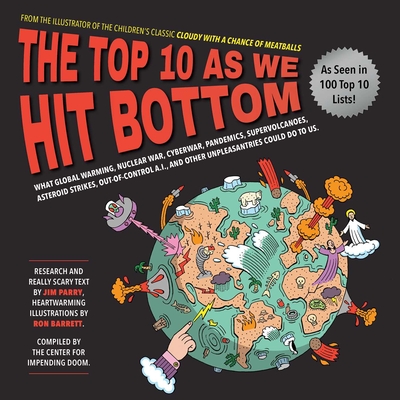 From best-selling author and illustrator Ron Barrett, who forecasted the weather in the classic picture book, Cloudy With a Chance of Meatballs, now predicts how—thanks to climate change and other unpleasantries—the world will end!

With research and really scary text by Jim Parry, The Top Ten As We Hit Bottom is a darkly humorous collection of “Top Ten” lists that highlights the predicament global warming and other impending catastrophes have put us into.

Though some might call these lists “fake news” (we’re looking at you, Donald), these lists are compiled and culled from the world's most credible authorities like NASA, the UN, and the Union of Concerned Scientists. But coupled with darkly humorous illustrations, you’ll be laughing your way all the way down in our race toward the bottom!

Here are some Top 10 lists to whet your appetite for Earth’s impending doom:

Ron Barrett is the author, along with Judy Barrett, of the classic picture book, Cloudy With a Chance of Meatballs, one of the New York Times Ten Best Illustrated Books.  It has sold over six million copies globally and produced two motion pictures, a TV series, two sequels, a cookbook and plastic toys in Happy Meals.

Ron’s work has appeared frequently in the New York Times since 1991, earning him two places in The Times Best Illustrations of the Past 20 Years exhibit at the Society of Illustrators.  His illustrations have been exhibited twice at The Louvre’s Museé des Arts Décoratifs.  He has been a consultant to the Children’s TV Workshop (Sesame Street) and Art Director of The National Lampoon where he created its most popular comic strip, Politenessman.

Jim Parry misspent his years as a Harvard undergraduate by starting the Gargoyle, a humor magazine to compete with the Lampoon.

Since then he has had a thriller, The Discovery (published by HarperCollins), has co-written comedic screenplays sold to Columbia and Universal and, most recently, has blogged on Huffington Post as Ranting Political Poet.

Voted, and proud to be, Class Cynic of his high school graduating class and maintaining a darkly comic view of humankind’s prospects, Jim is the founder of the Center for Impending Doom.