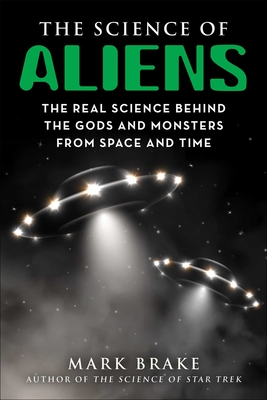 Discover the real science behind 2001, ET, Signs, and all your favorite fictional alien civilizations.

As space telescopes continue to search for life in this unearthly Universe, the crucial questions remain unanswered. Are we awake to the revolutionary effects on human society and science that alien contact will bring? And how is it possible to imagine the unknown? The Science of Aliens tells the compelling story of how the portrayal of alien life has evolved over time.

Taking examples from science, film, and fiction, this book showcases how scholars, filmmakers, and authors have devoted their energies to imagining life beyond this Earth. From Copernicus to Kubrick, The Science of Aliens is a fascinating account for anyone interested in extraterrestrials.

Visualize the unknown and redefine your place in a changing cosmos with The Science of Aliens.

Mark Brake developed the world’s first science and science fiction degree in 1999. He also launched the world’s first astrobiology degree in 2005. He’s communicated science through film, television, print, and radio on five continents, including for NASA, Seattle’s Science Fiction Museum, the BBC, the Royal Institution, and Sky Movies. He was one of the founding members of NASA’s Astrobiology Institute Science Communication Group. He has written more than a dozen books, including Alien Life Imagined for Cambridge University Press in 2012. Mark also tours Europe with Science of Doctor Who, Science of Star Wars, and Science of Superheroes road shows.