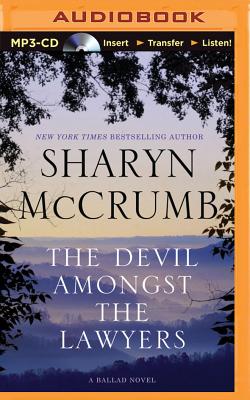 This is book number 8 in the Ballad series.

“Erma Morton, a beautiful, educated woman from the mountains of Virginia is accused of murdering her father in 1935. Journalists from big city newspapers flock to remote Wise County to report their version of life and death in 'them thar hills.' McCrumb has utilized a true murder case to set the facts straight about her beloved Appalachian way of life. This is a novel of passion, mystery and magic, as well as a wake-up call to the power and influence of the media.”
— Karen Briggs, Great Northern Books and Hobbies, Oscoda, MI

In 1935, when Erma Morton, a beautiful young woman with a teaching degree, is charged with the murder of her father in a remote Virginia mountain community, the case becomes a cause c l bre for the national press. Eager for a case to replace the Lindbergh trial in the public's imagination, the journalists descend on the mountain county intent on infusing their stories with quaint local color: horse-drawn buggies, rundown shacks, children in threadbare clothes. They need tales of rural poverty to give their Depression-era readers people whom they can feel superior to. The untruth of these cultural stereotypes did not deter the big-city reporters, but a local journalist, Carl Jennings, fresh out of college and covering his first major story, reports what he sees: an ordinary town and a defendant who is probably guilty. This journey to a distant time and place summons up ghosts from the reporters' pasts: Henry Jernigan's sojourn in Japan that ended in tragedy, Shade Baker's hardscrabble childhood on the Iowa prairie, and Rose Hanelon's brittle sophistication, a shield for her hopeless love affair. While they spin their manufactured tales of squalor, Carl tries to discover the truth in the Morton trial with the help of his young cousin Nora, who has the Sight. But who will believe a local cub reporter whose stories contradict the nation's star journalists? For the listener, the novel resonates with the present: an economic depression, a deadly flu epidemic, a world contending with the rise of political fanatics, and a media culture determined to turn news stories into soap operas for the diversion of the masses.