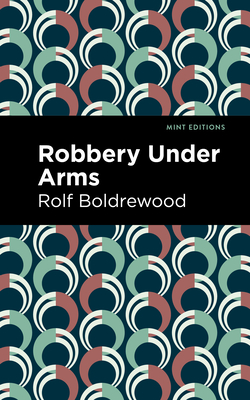 Robbery Under Arms (1888) is a novel by Rolf Boldrewood, the pseudonym of Australian novelist Thomas Browne. A squatter for nearly twenty-five years, he came to know the ways of life on the outskirts of civilization, which allowed him to lead a peaceful, uncomplicated, and inexpensive existence. Originally serialized in Australian weekly magazines, Browne's work as Rolf Bolfrewood is an incomparable record of colonial Australia, where outlaws and speculators lived side by side on land stolen from the continent's Aboriginal peoples. Robbery Under Arms has been adapted several times for film and theater. "My name's Dick Marston, Sydney-side native. I'm twenty-nine years old, six feet in my stocking soles, and thirteen stone weight. Pretty strong and active with it, so they say. I don't want to blow--not here, any road--but it takes a good man to put me on my back, or stand up to me with the gloves, or the naked mauleys." Imprisoned for his crimes, Dick Marston prepares to be executed. With one month to live, he sits down to write the story of his life as an Australian bushranger. Alongside Captain Starlight, an English nobleman turned outlaw, he participated in a string of cattle thefts and armed robberies that would bring him enough gold and infamy to last a lifetime. Action-packed and fast-paced, Robbery Under Arms is a brilliant adventure novel from one of nineteenth century Australia's most popular writers of fiction. With a beautifully designed cover and professionally typeset manuscript, this edition of Rolf Boldrewood's Robbery Under Arms is a classic work of Australian literature reimagined for modern readers.