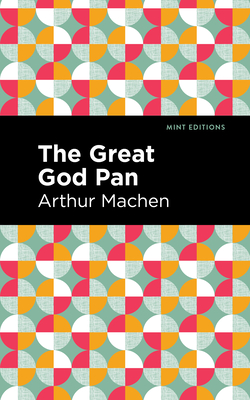 The Great God Pan (1894) is a novella by Arthur Machen. Condemned as decadent and obscene upon publication, The Great God Pan earned praise from Oscar Wilde and H. P. Lovecraft, and is now regarded as one of Victorian literature's finest--and most unsettling--stories of horror and the occult. Throughout the years, it has influenced such figures as Stephen King, Guillermo del Toro, and Josh Malerman with its depiction of the god Pan and unsettling blend of science, myth, and magic. Clarke has always taken an interest in occult matters, so when a friend offers him a chance to witness an experimental procedure intended to access the spirit realm, he cannot refuse. When the young patient Mary awakens, she shows signs of terror and soon succumbs to a catatonic state. Convinced of their success in discovering the world of "the great god Pan," Clarke and Raymond agree to keep their discovery a secret. Years later, a nearby town begins reporting the mysterious disappearances of young children, all of whom have been seen in the forest with a young woman named Helen Vaughn. Before they can solve the case, however, Vaughn disappears, leaving Clarke and the townspeople traumatized. As their secret grows too terrible to bear, Raymond and Clarke must steel themselves in order to solve the connection between Mary and Helen, and to close the portal to the spirit realm for good. With a beautifully designed cover and professionally typeset manuscript, this edition of Arthur Machen's The Great God Pan is a classic of British horror fiction reimagined for modern readers.