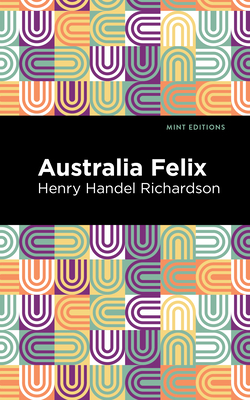 Australia Felix (1917) is a novel by Henry Handel Richardson. Based on the life of her parents, Australia Felix is the first in a trilogy of novels later published as The Fortunes of Richard Mahony (1930). The trilogy has earned praise from countless authors and critics for its startling depictions of a man's decline due to mental illness and the lengths to which his wife must go to care for their young family. "In a shaft on the Gravel Pits, a man had been buried alive. At work in a deep wet hole, he had recklessly omitted to slab the walls of a drive; uprights and tailors yielded under the lateral pressure, and the rotten earth collapsed, bringing down the roof in its train." Into this dangerous world of mining, Richard Mahony arrives in search of fortune. As the proprietor of Digger's Emporium, his business depends on the trust of his customers, most of them rugged, hard-drinking gold miners. But the men find it hard to respect Mahony, a teetotaler whose upper-class sensibilities strike them as snobbish at best, insulting at worst. As his store slowly fails, Richard turns his attention to the young Polly Turnham, a servant at the local hotel. When they marry, Polly suggests to her husband that he abandon his business and turn to medicine instead. His practice in Ballarat is a success, allowing them to start a family and live comfortably--for a time. With a beautifully designed cover and professionally typeset manuscript, this edition of Henry Handel Richardson Australia Felix is a classic of Australian literature reimagined for modern readers.