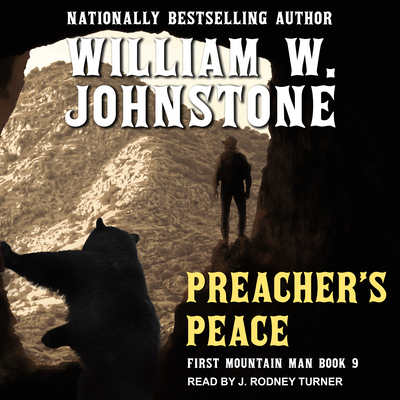 By William W. Johnstone, J. Rodney Turner (Narrated by)
Email or call for price
Out of Print

This is book number 9 in the First Mountain Man series.

Long before there was a mountain man called Preacher, a young adventurer set off with a team of fur traders from St. Louis for the time of his life. On a wild frontier, he sought a fortune. Instead, he found blood, betrayal, and the beginning of a legend. Armed only with a knife, surrounded by a fierce Blackfoot war party, the young man was forced to kill a warrior chief in an act of audacious courage. But when a grizzly bear attack left him half-dead, he could no longer protect himself. By the time the Blackfeet found him again, he had been abandoned and doublecrossed, with only one last trick up his sleeve: the ability to talk himself out of an impossible situation-and into a battle for his life. So began William Johnstone's masterful saga of the courageous loner who would become known as Preacher. Because when he was alone and desperate, he drew on a preacher's skills-and a mountain man's cunning-to give his enemies hell.
My Account • Sign In • Sign Out • Register
NEW & USED BOOKS
AUTHOR EVENTS • GIFTS
Tempe
6428 South McClintock Drive
480.730.0205
[Google Map]
Sunday-Friday 10am-8pm
Saturday 9am-8pm
Trade Counter 11am-6pm daily