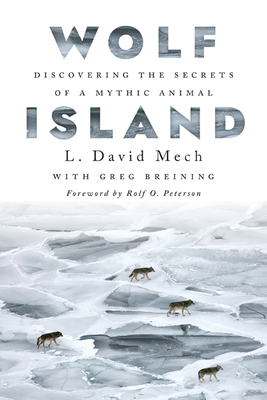 In the late 1940s, a small pack of wolves crossed the ice of Lake Superior to the island wilderness of Isle Royale, creating a perfect “laboratory” for a long-term study of predators and prey. As the wolves hunted and killed the island’s moose, a young graduate student named Dave Mech began research that would unlock the mystery of one of nature’s most revered (and reviled) animals—and eventually became an internationally renowned and respected wolf expert. This is the story of those early years.

Wolf Island recounts three extraordinary summers and winters Mech spent on the isolated outpost of Isle Royale National Park, tracking and observing wolves and moose on foot and by airplane—and upending the common misperception of wolves as destructive killers of insatiable appetite. Mech sets the scene with one of his most thrilling encounters: witnessing an aerial view of a spectacular hunt, then venturing by snowshoe (against the pilot’s warning) to photograph the pack of hungry wolves at their kill. Wolf Island  owes as much to the spirit of adventure as to the impetus of scientific curiosity. Written with science and outdoor writer Greg Breining, who recorded hours of interviews with Mech and had access to his journals and field notes from those years, the book captures the immediacy of scientific fieldwork in all its triumphs and frustrations. It takes us back to the beginning of a classic environmental study that continues today, spanning nearly sixty years—research and experiences that would transform one of the most despised creatures on Earth into an icon of wilderness and ecological health.

L. David Mech is a senior research scientist with the U.S. Geological Survey and adjunct professor in the departments of Fisheries, Wildlife, and Conservation Biology and of Ecology, Evolution, and Behavior at the University of Minnesota. Among his many books are The Wolf: The Ecology and Behavior of an Endangered Species and the coauthored The Wolves of Denali (both from Minnesota). He is founder of the International Wolf Center in Ely, Minnesota.

Greg Breining has written for the New York Times, Sports Illustrated, National Geographic Traveler, and Audubon, among many other publications. He has written more than a dozen books, including Wild Shore: Exploring Lake Superior by Kayak (Minnesota, 2000).

Rolf O. Peterson is research professor at Michigan Technological University, where he has led the wolf–moose study at Isle Royale since the early 1970s.

"No scientist has done more to shape our understanding of wolves than L. David Mech, and no ecosystem has been more influential than Isle Royale. Wolf Island is a lively, well-told story that sheds new light on the early days of ecology’s most important long-term study, the formative years of a master biologist, and the complex lives of an iconic and misunderstood predator."—Ben Goldfarb, author of Eager: The Surprising, Secret Life of Beavers and Why They Matter

"L. David Mech’s writing on wolves is foundational: every new study owes a debt to his scholarship, and any respectable stack of wolf books is anchored by The Wolf, his indispensable classic. With Wolf Island, we now have a volume to top the stack as well. Mech’s excellent and eminently readable account of the origins of his fieldwork in Isle Royale National Park is as inspirational as it is educational. Here’s hoping it sends another generation of students—and readers of all ages—into the wild."—Nate Blakeslee, author of American Wolf: A True Story of Survival and Obsession in the West

"For many of us fascinated with wolves, Adolph Murie and L. David Mech are the two scientist/field naturalists whose books first gave these animals life and breath. Now, in this unflinching and highly readable memoir, Mech lets readers experience the inside story of how, as a young graduate student, he illuminated the murky world of America’s iconic predator. And ended up writing a classic."—Dan Flores, New York Times bestselling author of Coyote America: A Natural and Supernatural History

"An important read for budding wildlife biologists and anyone interested in the survival of species."—Wilderness News

"The book is enjoyable, informative, fascinating and will convince readers Isle Royale is unique."—Michigan In Books

"Filled with details of fascinating discoveries and engaging first-person stories... The book should be in all libraries."—CHOICE

"An interesting read for anyone who enjoys science and nature."—Northern Wilds

"Essential Reading for those who are interested in wold biology and their management."—Biological Conservation