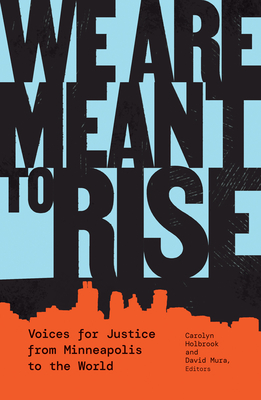 A brilliant and rich gathering of voices on the American experience of this past year and beyond, from Indigenous writers and writers of color from Minnesota

In this significant collection, Indigenous writers and writers of color bear witness to one of the most unsettling years in the history of the United States. Essays and poems vividly reflect and comment on the traumas we endured in 2020, beginning with the arrival of the COVID-19 pandemic crisis, deepened by the blatant murder of George Floyd by Minneapolis police officers and the uprisings that immersed our city into the epicenter of passionate, worldwide demands for justice. In inspired and incisive writing these contributors speak unvarnished truths not only to the original and pernicious racism threaded through the American experience but also to the deeply personal, in essays about family, loss, food culture, economic security, and mental health. Their call and response is united here to rise and be heard.

We Are Meant to Rise lifts up the astonishing variety of BIPOC writers in Minnesota. From authors with international reputations to newly emerging voices, it features people from many cultures, including Indigenous Dakota and Anishinaabe, African American, Hmong, Somali, Afghani, Lebanese, Korean, Vietnamese, Japanese, Puerto Rican, Colombian, Mexican, transracial adoptees, mixed race, and LGBTQ+ perspectives. Most of the contributors have participated in More Than a Single Story, a popular and insightful conversation series in Minneapolis that features Indigenous and people of color speaking on what most concerns their communities.

We Are Meant to Rise meets the events of the day, the year, the centuries before, again and again, with powerful testament to the intrinsic and unique value of the human voice.

Carolyn Holbrook is the founder and director of More Than a Single Story. She is author of the essay collection Tell Me Your Names and I Will Testify (Minnesota, 2020), winner of a Minnesota Book Award, and coauthor of Dr. Josie R. Johnson’s memoir Hope in the Struggle (Minnesota, 2019). She teaches creative writing at Hamline University, the Loft Literary Center, and other community venues.

David Mura’s most recent book is A Stranger’s Journey: Race, Identity, and Narrative Craft in Writing. He is author of two memoirs, Turning Japanese: Memoirs of a Sansei, which won the Oakland PEN Josephine Miles Book Award and was a New York Times Notable Book, and Where the Body Meets Memory.

"Diversity is our strength. Each new voice who becomes part of America is our strength. The writers in this anthology provide us with individualized portraits of who we are, and in doing so they can help us to know each other, our neighbors, our fellow citizens. These writers prove we are indeed more than a single story."—David Mura, from the Introduction

"A powerful and passionate take on a fraught moment."—Publishers Weekly

"This collection is diverse, enraging, heartbreaking, impassioned and this month’s #RequiredReading."—Ms. Magazine

"The book acts as a time capsule of reflections of being Black, brown, indigenous immigrant in a city that resembles much of American. There are poignant stories of immigration from the points of view of various communities, including Hmong, Somali, Korean, Lebanese, among others. Many stories share the narrative of survival, of healing from trauma, and emerging intact from the crushing weight of generational wounds. "—Colors of Influence

"We Are Meant to Rise offers a different vision of past and present, unflinching in its gaze on our national and local sins but ultimately affirming hope and possibility."—Minnesota Spokesman Recorder