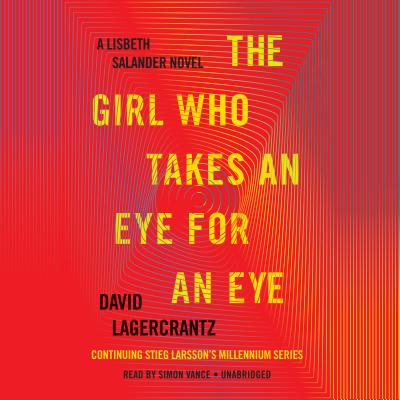 By David Lagercrantz, Simon Vance (Read by)
$45.00
Email or call for price.

This is book number 5 in the Millennium Series series.

In this 2nd sequel to Stieg Larsson's Millennium Series, Lisbeth Salander and Mikael Blomkvist are once more at the center of well crafted fast-moving tale that is totally faithful to Larsson's original characters. Ultimately about revenge, it moves between nail-biter and tear-jerker with short excursions into financial market analysis and biogenetic research. Except for a scattering of sex and humor, there's never a pause in the action. It's also available in an audio version from Libro.fm, the independent choice for audiobooks.

Lisbeth Salander is back with a vengeance.

The series that began with The Girl with the Dragon Tattoo continues as brilliant hacker Lisbeth Salander teams up with journalist Mikael Blomkvist to uncover the secrets of her childhood and to take revenge.

Lisbeth Salander—obstinate outsider, volatile seeker of justice for herself and others—seizes on a chance to unearth her mysterious past once and for all. And she will let nothing stop her—not the Islamists she enrages by rescuing a young woman from their brutality; not the prison gang leader who passes a death sentence on her; not the deadly reach of her long-lost twin sister, Camilla; and not the people who will do anything to keep buried knowledge of a sinister pseudoscientific experiment known only as The Registry. Once again, Lisbeth Salander and Mikael Blomkvist are the fierce heart of a thrilling full-tilt novel that takes on some of the world's most insidious problems.

DAVID LAGERCRANTZ was born in 1962 and is an acclaimed author and journalist. He has written numerous biographies (including the internationally best-selling I Am Zlatan Ibrahimović, for which he was the ghostwriter) and four novels, including Fall of Man in Wilmslow and the #1 best-selling The Girl in the Spider's Web.

“Wonderful . . . It would be hard to imagine a sequel more faithful to its work of origin than this one. . . . Salander, though, emerges as the most dramatic, charismatic and effective investigator of them all: weak in social skills but unmatched in speaking blunt truth to corrupt power.”
—Tom Nolan, The Wall Street Journal

“The enduring draw at the center of the Millennium series is that image of a strange and solitary young woman trying to even the score with all manner of bullies by dint of her brains and, when called for, some martial arts moves.”
—Maureen Corrigan, The Washington Post

“Like The Girl in the Spider’s Web, this book is a worthy successor to Larsson’s trilogy. But, The Girl Who Takes an Eye also feels like a tipping point, in which Lagercrantz begins to march the saga in a direction all his own.”
—Ed Swedlund, Paste magazine

“Somewhere, beyond the grave in the Great Hereafter, Stieg Larsson must be smiling. . . . Swedish journalist and author David Lagercrantz has produced a multilayered and even better thriller this time around in his second outing continuing Larsson’s Millennium series, crafting an intricate web of intrigue. . . . Lagercrantz is a master.”
—Jean Westmoore, The Buffalo News

“Hacker extraordinaire Lisbeth Salander and crusading journalist Mikael Blomkvist do social good as the thrills accelerate in The Girl Who Takes an Eye for an Eye. They’re a winning couple.”
—Carlo Wolff, Pittsburgh Post-Gazette

“Always satisfying . . . Lisbeth, as always, serves as an avenging angel who herself isn’t the nicest of people.”
—Kirkus Reviews

“The legacy of Lisbeth Salander lives on. . . . Lagercrantz succeeds in carefully staying true to the framework created by the late Stieg Larsson. . . . In this new world where everything is suspect, including proclaimed facts, it is the dragons that protect and avenge the downtrodden.”
—Michael Ruzicka, Booklist (starred review)