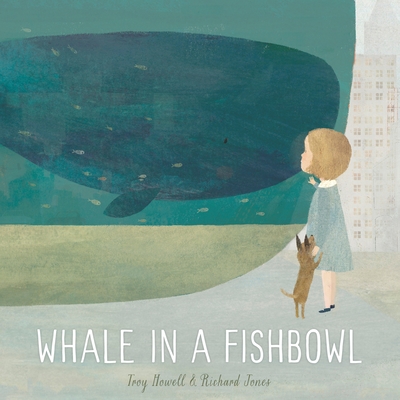 A moving, poetic story about a whale in captivity who longs for the ocean . . . because whales don't belong in fishbowls, do they?

Wednesday is a whale who lives in a fishbowl smack dab in the middle of a city--it's the only home she's ever known. Cars whizz around her and people hurry past; even the sun and moon circle above. But if she leaps high enough out of her bowl, Wednesday can see it: a calm bit of blue off in the distance. When a girl in a paisley dress tells Wednesday "You belong in the sea," the whale starts to wonder, what is the sea? Readers will cheer--and get all choked up-- when, one day, Wednesday leaps higher than ever before and sets in motion a breathtaking chain of events that will carry her to her rightful home. Touching, and ultimately uplifting, here is a story about a lonely creature longing to be free--and longing to find someone just like her.

Troy Howell has been writing and illustrating books for more than 25 years. His many awards and distinctions include starred reviews in Kirkus Reviews, Publishers Weekly, and School Library Journal; an American Bookseller Pick of the Lists; an Educational Press Association of America Distinguished Achievement Award; and Merit Awards from the Los Angeles Society of Illustrators and the New York Society of Illustrators. Visit him on the Web at troyhowelletc.com or follow him on Twitter at @TroyHow11.

Richard Jones has over 15 years experience in creative arts, and has recently begun illustrating children's books. He is also the illustrator of Town Mouse, Country Mouse by Libby Walden, a reimagining of Aesop's fable. Visit him on the web at paintedmouse.com or follow him on Twitter: @apaintedmouse

"This subtle, satisfying narrative will be especially appealing to introspective readers who yearn for something that's perhaps yet unknown."—Kirkus Reviews, starred review

"The tale of how the solitary Wednesday discovers the sea and her destiny is heartwarming,
and readers will cheer for her."—Booklist, starred review

"By reaching for emotional rather than documentary truth, this team explores the injustice of captivity with a gentle touch."—Publishers Weekly, starred review