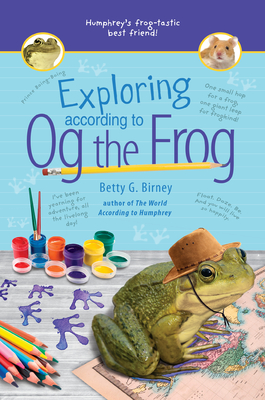 By Betty G. Birney
$16.99
Not Available In-Store - Usually Ships from Warehouse in 1-5 Days

In the second book in the Og the Frog spinoff of the Humphrey series, Og is ready for adventure and is jumping at the chance to help kids be brave!

Og loves the kids in Room 26, but he's awfully curious about the human world outside his tank! His friend Humphrey has no problem getting out and about, but it's harder for Og because he can't climb the way a hamster can.

But Og never let hard work or fear stop him from going after what he wants. And he's determined to help the tads in Room 26 understand that taking risks can pay off--especially when they are being true to themselves. Whether it's learning that a younger kid can have great ideas, a student who learns differently can have hidden talents, or ideas that seem crazy at first can actually be amazing if you look at them from a different perspective, Og wants everyone to celebrate their talents. And once he fully embraces his frogginess--BING-BANG-BOING--he figures out how to go where no frog has gone before.

Og's frog's-eye view of the world is curious, adventurous, and creative, and the perfect companion to Trouble According to Humphrey.

Betty G. Birney has written episodes for numerous children’s television shows, including The New Adventures of Madeleine, Doug, and Bobby’s World, as well as after-school specials and a television movie, Mary Christmas. She has won many awards for her television work, including an Emmy, three Humanitas Prizes, and a Writers Guild of America award. In addition to the Humphrey books, she is the author of The Seven Wonders of Sassafras Springs and The Princess and the Peabodys. A native of St. Louis, Missouri, Betty lives in Los Angeles with her husband, an actor.

"Inspired to explore by tales of human and frog adventurers, Og manages to make forays outside of his tank in between helping children. . . Punctuated by Og's froggy songs and poems as well as homespun wisdom from his very own Granny Greenleaf, the story hops along at a familiar pace. Readers craving more about Room 26 will enjoy the green frog with a heart of gold." -Kirkus Reviews


"[Og the Frog] is a poet and maker of songs, both of which appear throughout the book. . . He waxes philosophical at the end of the book, concluding that he is braver than he thought and that if you give new things a try and take chances then you can do amazing things. . . Could make for a light-hearted read-aloud paired with a unit of study on frogs and their habitats." -School Library Connection

"In this second book in the Og the Frog spinoff of the Humphrey series, Og is determined to experience life outside his tank in Room 26. It will take persistence, a shift in perspective, and embracing his individual skills to achieve his goal." --Publishers Weekly