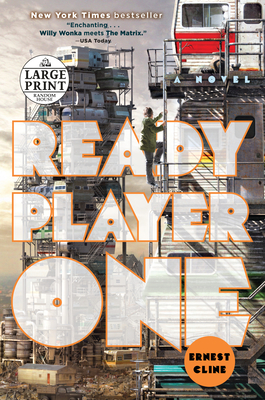 By Ernest Cline
$26.00
Not Available In-Store - Usually Ships from Warehouse in 1-5 Days

Although I missed out on the majority of the 1980's, reading Ready Player One was intensely enjoyable despite being stuffed full of 80's references, from the common to the obscure. Wade is a teen who lives in the incredibly grim future–year 2044, where most of the world's resources have been used up and there's little hope for improvement. The only thing keeping him and the rest of the impoverished world sane is Oasis, a sophisticated virtual reality that far surpasses our current reality. When the founder of Oasis died he left keys buried around the many planets he created. The person who solves the clues (all involving his obsession with the 1980's) will inherit his massive fortune. No one has made any progress on the challenging puzzle–until Wade. Now he's fighting for a fortune and his life. I foresee this being a huge crossover hit with both adults who miss the sweet sounds of synthesizer-laden music and teens who've never had the privilege of playing a coin-operated arcade game. Don't miss this one!

“The world in 2044, is a mess. Energy sources are depleted, cities are jam-packed and the lives of average people are full of misery. In order to escape the hardships of everyday life, billions escape into the electronic virtual world OASIS. When the multi-billionaire creator of OASIS dies, he leaves his fortune in trust for the first avatar to complete three virtual quests. Wade Watts, a lonely teenage misfit, decides to compete and win the prize. Filled with references to 1970s and '80s pop culture, Ready Player One is a love story, a quest novel and a parable for the electronic age.”
— John Hoover, Misty Valley Books, Chester, VT

“The world in 2044 is a mess. Energy sources are depleted, cities are jam-packed, and the lives of average people are full of misery. In order to escape the hardships of everyday life, billions escape into the electronic virtual world OASIS. When the multi-billionaire creator of OASIS dies, he leaves his fortune in trust for the first avatar to complete three virtual quests. Wade Watts, a lonely teenage misfit, decides to compete and win the prize. Filled with references to 1970s and '80s pop culture, Ready Player One is a love story, a quest novel, and a parable for the electronic age.”
— John Hoover, Misty Valley Books, Chester, VT

“Enchanting . . . Willy Wonka meets The Matrix.”—USA Today • “As one adventure leads expertly to the next, time simply evaporates.”—Entertainment Weekly

A world at stake. A quest for the ultimate prize. Are you ready?

In the year 2045, reality is an ugly place. The only time Wade Watts really feels alive is when he’s jacked into the OASIS, a vast virtual world where most of humanity spends their days.

When the eccentric creator of the OASIS dies, he leaves behind a series of fiendish puzzles, based on his obsession with the pop culture of decades past. Whoever is first to solve them will inherit his vast fortune—and control of the OASIS itself.

Then Wade cracks the first clue. Suddenly he’s beset by rivals who’ll kill to take this prize. The race is on—and the only way to survive is to win.

“A most excellent ride . . . Cline stuffs his novel with a cornucopia of pop culture, as if to wink to the reader.”—Boston Globe

“Ridiculously fun and large-hearted . . . Cline is that rare writer who can translate his own dorky enthusiasms into prose that’s both hilarious and compassionate.”—NPR

“[A] fantastic page-turner . . . starts out like a simple bit of fun and winds up feeling like a rich and plausible picture of future friendships in a world not too distant from our own.”—iO9

ERNEST CLINE is an internationally best-selling novelist, screenwriter, father, and full-time geek. He is the author of the novels Ready Player One and Armada and co-screenwriter of the film adaptation of Ready Player One, directed by Steven Spielberg.  His books have been published in over fifty countries and have spent more than 100 weeks on The New York Times bestseller list. He lives in Austin, Texas, with his family, a time-traveling DeLorean, and a large collection of classic video games.

“The science-fiction writer John Scalzi has aptly referred to READY PLAYER ONE as a “nerdgasm” [and] there can be no better one-word description of this ardent fantasy artifact about fantasy culture…But Mr. Cline is able to incorporate his favorite toys and games into a perfectly accessible narrative.”—Janet Maslin, The New York Times

“Triggers memories and emotions embedded in the psyche of a generation...[Cline crafts] a fresh and imaginative world from our old toy box, and finds significance in there among the collectibles.  A-”—Entertainment Weekly

“A most excellent ride…the conceit is a smart one, and we happily root for [the heroes] on their quest…fully satisfying.”—Boston Globe

“Enchanting…Willy Wonka meets the Matrix. This novel undoubtedly qualifies Cline as the hottest geek on the planet right now. [But] you don't have to be a geek to get it.”—USA Today

“Ridiculously fun and large-hearted, and you don't have to remember the Reagan administration to love it…[Cline] takes a far-out premise and engages the reader instantly…You'll wish you could make it go on and on.”—NPR.org

“A fun, funny and fabulously entertaining first novel…This novel's large dose of 1980s trivia is a delight…[but] even readers who need Google to identify Commodore 64 or Inky, Blinky, Pinky and Clyde, will enjoy this memorabilian feast.”—Cleveland Plain Dealer

“The grown-up's 'Harry Potter’…the mystery and fantasy in this novel weaves itself in the most delightful way, and the details that make up Mr. Cline's world are simply astounding. READY PLAYER ONE has it all.”—Huffington Post

“Incredibly entertaining…Drawing on everything from "Back to the Future" to Roald Dahl to Neal Stephenson's groundbreaking "Snow Crash," Cline has made READY PLAYER ONE a geek fantasia, '80s culture memoir and commentary on the future of online behavior all at once.”—Austin American-Statesman

“A treasure for anyone already nostalgic for the late 20th century. . . But it’s also a great read for anyone who likes a good book.”—Wired.com

“A gunshot of fun with a wicked sense of timing and a cast of characters that you're pumping your fist in the air with whenever they succeed. I haven't been this much on the edge of my seat for an ending in years.”—Chicago Reader

“A rollicking, surprise-laden, potboiling, thrilling adventure story…. I loved every sentence of this book”—Mark Frauenfelder, BoingBoing

“[A] fantastic page-turner….READY PLAYER ONE may be science fiction, but it's also written for people who have never picked up an SF novel in their lives…"—Annalee Newitz, io9.com

"Fascinating and imaginative…It's non-stop action when gamers must navigate clever puzzles and outwit determined enemies in a virtual world in order to save a real one. Readers are in for a wild ride."—Terry Brooks, #1 New York Times bestselling author of the Shannara series

“I was blown away by this book…A book of ideas, a potboiler, a game-within-a-novel, a serious science-fiction epic, a comic pop culture mash-up–call this novel what you will, but READY PLAYER ONE will defy every label you try to put on it. Here, finally, is this generation’s Neuromancer.”—Will Lavender, New York Times bestselling author of Dominance

“A nerdgasm…imagine Dungeons and Dragons and an 80s video arcade made hot, sweet love, and their child was raised in Azeroth.”—John Scalzi, New York Times bestselling author of Old Man’s War

“Completely fricking awesome...This book pleased every geeky bone in my geeky body.  I felt like it was written just for me.”—Patrick Rothfuss, #1 New York Times bestselling author of The Wise Man’s Fear

"This adrenaline shot of uncut geekdom, a quest through a virtual world, is loaded with enough 1980s nostalgia to please even the most devoted John Hughes fans… sweet, self-deprecating Wade, whose universe is an odd mix of the real past and the virtual present, is the perfect lovable/unlikely hero.”—Publishers Weekly, Pick of the Week