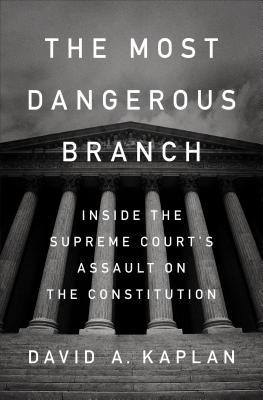 In the bestselling tradition of The Nine and The Brethren, The Most Dangerous Branch takes us inside the secret world of the Supreme Court. David A. Kaplan, the former legal affairs editor of Newsweek, shows how the justices subvert the role of the other branches of government—and how we’ve come to accept it at our peril.

Never before has the Court been more central in American life. It is now the nine justices who too often decide the biggest issues of our time—from abortion and same-sex marriage to gun control, campaign finance, and voting rights. The Court is so crucial that many voters in 2016 made their choice based on whom they thought their presidential candidate would name to the Court. Donald Trump picked Neil Gorsuch—the key decision of his new administration. The newest justice, Brett Kavanaugh—replacing Anthony Kennedy—is even more important, holding the swing vote over so much social policy. With the 2020 campaign underway, and with two justices in their ’80s, the Court looms even larger. Is that really how democracy is supposed to work?

Based on exclusive interviews with the justices, Kaplan provides fresh details about life behind the scenes at the Court: the reaction to Kavanaugh’s controversial arrival, the new role for Chief Justice John Roberts, Clarence Thomas's simmering rage, Antonin Scalia's death, Ruth Bader Ginsburg's celebrity, Breyer Bingo, and the petty feuding between Gorsuch and the chief justice.

Kaplan offers a sweeping narrative of the justices’ aggrandizement of power over the decades—from Roe v. Wade to Bush v. Gore to Citizens United. (He also faults the Court for not getting involved when it should—for example, to limit partisan gerrymandering.) But the arrogance of the Court isn't partisan: Conservative and liberal justices alike are guilty of overreach. Challenging conventional wisdom about the Court's transcendent power, as well as presenting an intimate inside look at the Court, The Most Dangerous Branch is sure to rile both sides of the political aisle.

David A. Kaplan was a senior editor and legal affairs correspondent at Newsweek for 20 years. While there, he wrote several dozen cover stories on the Court and other topics. Later he was a contributing editor at Fortune, where he wrote long-form profiles of Charlie Rose, Howard Schultz, David Geffen, and Ralph Nader, among others. He is the author of the national bestseller The Silicon Boys; an account of the 2000 presidential election, The Accidental President (on which the HBO feature film Recount was based); and Mine’s Bigger, about the largest sailboat in history, which won the Loeb Award for Best Business Book of 2008. These days, he teaches journalism and ethics at NYU and CUNY.

“If Brett Kavanaugh’s Supreme Court confirmation hearings have inspired you to dig deeper into the intricacies of the nation’s highest court, look no further than a new book devoted to the subject… Kaplan writes in an engaging fashion throughout this detailed book…The Most Dangerous Branch couldn’t be better.”
–Associated Press

“Show[s] how the justices take and rule on cases that they have, in Kaplan’s view, no legitimate role in deciding, and on the basis of legal reasoning that only barely masks partisan goals.  The high-profile 5-to-4 opinions Kaplan highlights are deserving targets.”
—The Washington Post

“Persuasively argu(es) that the court has lost its bearings. . . engaging, gossipy and often highly critical. . . [Kaplan] takes readers through a scathing tour of recent Supreme Court decisions. . .  A passionately argued and credible indictment of the court.”
–Publisher's Weekly

“Describe(s) the behind the scenes dealing that led to the appointment of the sitting Supreme Court . . . Presented at a level of granularity with which you may not be familiar.  It makes for engaging, if not reassuring, reading.”
–NPR.org

“Kaplan’s critique of judicial power will resonate with the court’s critics on both right and left.”’
–The Wall Street Journal

"Reminiscent of The Brethren…"
—The National Law Journal

“An informed discussion of a serious issue.”
—Kirkus Reviews

“A fascinating look at the Court during one of its most important, and divisive, eras... a perfect primer for helping Americans understand how members of the court came to justify their excessive involvement in various controversial issues"
–The Christian Science Monitor

“David Kaplan has an inquiring mind and a lively style. He also has some incredible sources inside the Court who have helped him open a window on the inner workings of the most opaque branch of our government. At a moment when the Court’s future hangs in the balance because of the retirement of Justice Kennedy, this book is important, even urgent (and it has plenty of dish, too).”
–DANIEL OKRENT
author of Last Call: The Rise and Fall of Prohibition

“This is a book for our times. As the Supreme Court has become a focus of elections, confirmation battles and partisan decisions, The Most Dangerous Branch tells the story, in a compelling way, of the “triumphalism” of the justices, both liberal and conservative. It warns against the increasing power of what was supposed to be the least dangerous branch—nine unelected judges who allocate to themselves decision-making authority over issues that should be left to the elected branches. Read it and start worrying. Then demand change.”
–ALAN DERSHOWITZ
Professor Emeritus at Harvard Law School and Author of The Case Against Impeaching Trump


“David Kaplan mixes the gifts of a colorful storyteller with the incisiveness of a first-class legal brief. Read this book for an original argument on a judicial power grab and to find out why Neil Gorsuch is ‘like an eight-year-old in a counter-revolutionary candy store.’”
–JONATHAN ALTER
author of The Center Holds: Obama and His Enemies


“Unafraid of the controversy he will certainly create, David Kaplan has written an important and provocative book about our nation’s least understood, and yet enormously powerful, branch of government. It’s a book that every citizen should read.”
–DAVID BOIES
Chairman, Boies Schiller Flexner and Author of Courting Justice


“With the voice of a gifted narrator and the insight of a relentless journalist, Kaplan lifts the veil on the Supreme Court. Through intimate portraits of the nine justices, explorations of their most consequential decisions, and a cinematic portrayal of the Court's central role in our politics, Kaplan makes a compelling case that the other branches have acquiesced to the Court’s power – and that the Court is indeed The Most Dangerous Branch.”
–DANNY STRONG
Co-creator of Empire; Screenwriter for Recount, Game Change, The Butler


“Kaplan spares the feelings of neither liberals nor conservatives in this provocative and timely account of how the Supreme Court evolved into something the founders wouldn’t recognize.”
–H.W. BRANDS
Jack S. Blanton Chair in History at the University of Texas at Austin, and author of Traitor to His Class and Reagan: The Life