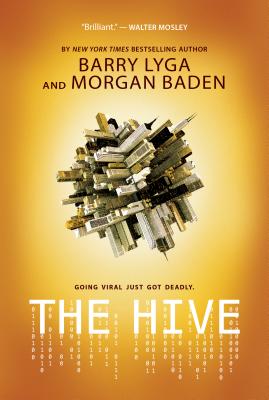 A Winner of People Magazine's Best Books for Fall 2019.

New York Times bestselling authors Barry Lyga and Morgan Baden have teamed up for the first time to create a novel that's gripping, terrifying and more relevant every day. Cassie McKinney has always believed in the Hive. Social media used to be out of control, after all. People were torn apart by trolls and doxxers. Even hackers --- like Cassie's dad --- were powerless against it. But then the Hive came. A better way to sanction people for what they do online. Cause trouble, get too many "condemns," and a crowd can come after you, teach you a lesson in real life. It's safer, fairer and perfectly legal. Entering her senior year of high school, filled with grief over an unexpected loss, Cassie is primed to lash out. Egged on by new friends, she makes an edgy joke online. Cassie doubts anyone will notice. But the Hive notices everything. And as her viral comment whips an entire country into a frenzy, the Hive demands retribution. One moment Cassie is anonymous; the next, she's infamous. And running for her life. With nowhere to turn, she must learn to rely on herself --- and a group of Hive outcasts who may not be reliable --- as she slowly uncovers the truth about the machine behind the Hive.

Barry Lyga is the New York Times bestselling author of the I Hunt Killers trilogy as well as such critically acclaimed novels as Boy Toy and Bang. He's also a comic book nerd who geeks out by writing superhero novels, including the Flash series and Thanos: Titan Consumed. He lives outside New York City, in a house bursting with books.

Morgan is a New York Times bestselling ghostwriter, as well as a social media expert who oversees communications for the world's largest children's book publisher. She lives outside New York City, in a house bursting with books.

Everybody told you to quit social media, and you didn't listen. The Hive is your last warning. Thrilling, chilling, nightmare-fulfilling, The Hive is a wild, spooky ride into a terrifying future that looks a lot like tomorrow.—Paul Griffin, author of Adrift

Mob justice rules the internet in this thrilling debut from Lyga and Baden. You'll never look at your phone the same way again.—Allen Zadoff, author of The Unknown Assassin series

A brilliant doomsday warning about the perils of social media, justice, and mob thought, The Hive is also the complex story of a young girl coming of age. This is a novel about ideas, love, grief, and what hold the tricky narratives of history have on the violence of the present.—Walter Mosley, award-winning crime novelist

... [A] high-concept, fast-paced ... cautionary tale of the morally fraught territory that results when technology and mob mentality mix ... this dystopian tale seems destined for a screen adaptation.—Kirkus Reviews

The husband-and-wife writing team capture the horrors of mob mentality in this gripping, tense, action-packed thriller that will appeal to fans of Marie Lu's Warcross (2017) or Gregory Scott Katsoulis' All Rights Reserved (2017).—Booklist

This fast-paced and sometimes highly technical novel will appeal to readers aged 14 and up who love a dystopian chase.—The Calgary Herald

... The Hive is well-worth reading.—CM Magazine

An eye-opening story about online comments and the consequences they may have in real life.—ABQLA