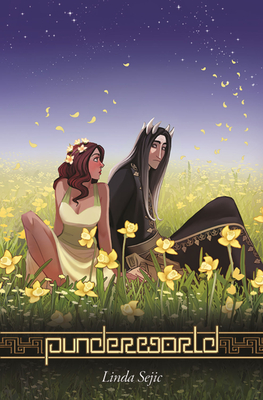 I read this in one sitting and Hades is a whole mood. Who would have thought that the God of Underworld was socially awkward. After knowing Persephone for about 200 years they still do not know each others names and it's not until Zeus gives Hades the courage that he finally decides to actually talk to her. However, Zeus' plan causes them to get on a chariot they cannot control and they end up crashing into the underworld. I cannot wait to see where this story goes and which direction the author takes on this relationship. — From Mercedes' Picks (page 2)

I love a Hades and Persephone retelling, and this one checks all the boxes. Both characters are more than their myth of origin. Hades is awkward and shy, and committed to his duty managing the shades of the underworld. Persephone is young and defiant. She loves her work, but eternal summer is taking its toll, as is her overprotective mother. Their meeting is a bit of a blunder. There's a fire and a small tidal wave and the ghost of Oedipus Rex. It is equal parts chaos and charm. — From Cailey's Picks

Hades and Persephone's love-struck misadventures. The classic tale of Greek mythology, but 100% more awkwardly relatable. Hades is the officious, antisocial ruler of the Underworld; Persephone, daughter of Demeter, is an earth goddess of growth and renewal - they've been crushing on each other for the past two centuries. But when a festival (and a little liquid courage) present an opportunity to put an end to their olympian will-they-won't-they, a meddlesome pantheon and several titanic misassumptions threaten to give every god in the sky the wrong impression... and leave their romance dead before it can bloom.