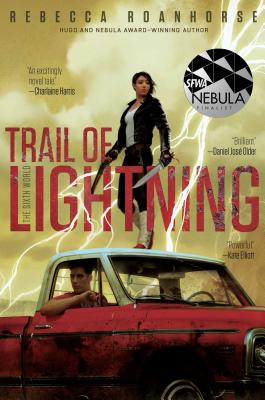 By Rebecca Roanhorse
$27.99
Email or call for price.

This is book number 1 in the The Sixth World series.

One of the Time 100 Best Fantasy Books Of All Time

“Someone please cancel Supernatural already and give us at least five seasons of this badass Indigenous monster-hunter and her silver-tongued sidekick.” —The New York Times

While most of the world has drowned beneath the sudden rising waters of a climate apocalypse, Dinétah (formerly the Navajo reservation) has been reborn. The gods and heroes of legend walk the land, but so do monsters—and it is up to one young woman to unravel the mysteries of the past before they destroy the future.

Maggie Hoskie is a Dinétah monster hunter, a supernaturally gifted killer. When a small town needs help finding a missing girl, Maggie is their last best hope. But what Maggie uncovers about the monster is much more terrifying than anything she could imagine.

Maggie reluctantly enlists the aid of Kai Arviso, an unconventional medicine man, and together they travel the rez, unraveling clues from ancient legends, trading favors with tricksters, and battling dark witchcraft in a patchwork world of deteriorating technology.

As Maggie discovers the truth behind the killings, she will have to confront her past if she wants to survive.

Welcome to the Sixth World.

Rebecca Roanhorse is the New York Times bestselling author of Trail of Lightning, Storm of Locusts, Black Sun, and Star Wars: Resistance Reborn. She has won the Nebula, Hugo, and Locus Awards for her fiction, and was the recipient of the 2018 Astounding Award for Best New Writer. The next book in her Between Earth and Sky series, Fevered Star, is out in April 2022. She lives in New Mexico with her family.

An Amazon Best Science Fiction and Fantasy of 2018 Selection

Selected as a Highly Anticipated Summer Read by Amazon, Barnes & Noble, and iBooks.

An Amazon Best Book of the Month Selection

One of Bustle's top 20 books of the decade

“Someone please cancel ‘Supernatural’ already and give us at least five seasons of this badass indigenous monster-hunter and her silver-tongued sidekick."
— - The New York Times

“What an astonishing tour de force with thrilling action, fascinating characters and a near future vision of America that I've never seen before. Urban fantasy just got a whole new lease on life.”
— -- Charlie Jane Anders,

"It’s the perfect book to pack for the beach or on a summer trip.”
— – Andrew Liptak

“Roanhorse is indigenizing the future of science fiction and fantasy.”
— – SYFY Wire

"Super great! It is so exciting to read such a fresh take on Urban Fantasy."
— Ana Grilo,

“What’s not to love about Trail of Lightning? It’s a frakking awesome novel and a fantastic prelude to what is sure to be a thrilling series.”
— – Alex Brown

"Trail of Lightning has set a new standard for speculative fiction."
— - BookPage

"I could have read about Maggie, her badassery, her damage, and her perseverance for hundreds more pages."
— , Anomaly

"It's tense and exciting, and a wholly new turn on post-apocalyptic tropes."
— John Scalzi, New York Times Bestselling author of The Consuming Fire