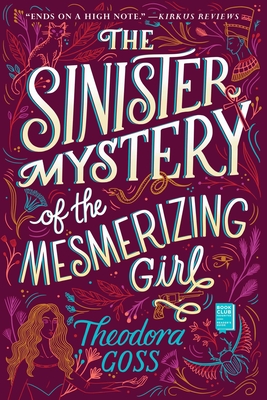 By Theodora Goss
$16.99
Not Available In-Store - Usually Ships from Warehouse in 1-5 Days

Mary Jekyll and the Athena Club foil a plot to unseat the Queen and race to save one of their own in this electrifying conclusion to the Locus Award winning trilogy that began with The Strange Case of the Alchemist’s Daughter.

Life’s always an adventure for the Athena Club...especially when one of their own has been kidnapped! After their thrilling European escapades rescuing Lucina van Helsing, Mary Jekyll, and her friends return home to discover that their friend and kitchen maid Alice has vanished—and so has their friend and employer Sherlock Holmes!

As they race to find Alice and bring her home safely, they discover that Alice and Sherlock’s kidnapping are only one small part of a plot that threatens Queen Victoria, and the very future of the British Empire. Can Mary, Diana, Beatrice, Catherine, and Justine save their friends—and the Empire?

In the final volume of the trilogy that Publishers Weekly called “a tour de force of reclaiming the narrative, executed with impressive wit and insight” in a starred review, the women of the Athena Club will embrace their monstrous pasts to create their own destinies.

Theodora Goss is the World Fantasy Award–winning author of many publications, including the short story collection In the Forest of Forgetting; Interfictions, a short story anthology coedited with Delia Sherman; Voices from Fairyland, a poetry anthology with critical essays and a selection of her own poems; The Thorn and the Blossom, a novella in a two-sided accordion format; and the poetry collection Songs for Ophelia; and the novels, The Strange Case of the Alchemist’s Daughter, European Travel for the Monstrous Gentlewoman, and The Sinister Mystery of the Mesmerizing Girl. She has been a finalist for the Nebula, Locus, Crawford, Seiun, and Mythopoeic Awards, as well as on the Tiptree Award Honor List, and her work has been translated into eleven languages. She teaches literature and writing at Boston University and in the Stonecoast MFA Program. Visit her at TheodoraGoss.com.
My Account • Sign In • Sign Out • Register
NEW & USED BOOKS
AUTHOR EVENTS • GIFTS
Tempe
6428 South McClintock Drive
480.730.0205
[Google Map]
10am-7pm daily
Trade Counter 11am-6pm daily