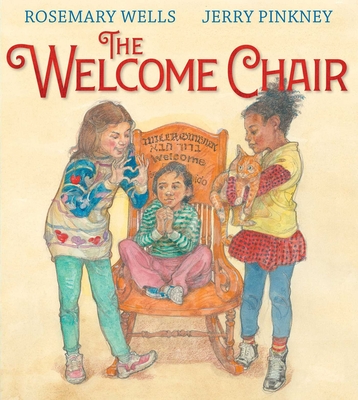 Based in part on a 100-year-old family journal, Rosemary Wells brings to life a story that the diary’s fragile pages tell. It’s the story of a wooden rocking chair handmade in about 1825 by her great-great-grandfather, an immigrant Jewish boy who made his way to America from Germany in the early 1800s.

In 1807, Sam Siegbert is born in southern Germany. Sam’s favorite pastime is carpentry, much to his father’s displeasure. His mother says he has a gift from God in his hands. After moving to America, he builds a wooden chair with the word WILLKOMMEN on the back. The chair’s back panel was later marked with welcomes by four generations of the family in four different languages.

After the family lost track of the old chair, the author created a new life for it among new owners from other corners of the world. All the families who loved the chair came to America, escaping religious conformity, natural disasters, tyrannies, war, and superstition. In its lifetime, the rocking chair, with its earliest word WILLKOMMEN, stood for openness, hospitality, and acceptance to all who owned it or rocked safely in its embrace.

Rosemary Wells is the author of more than one hundred and twenty books for children in her forty-five-year career, including more than forty about the beloved bunnies, Max and Ruby, who star in their own television show on Nick Jr. She lives in New England. Visit her online at RosemaryWells.com.

One legendary author/illustrator turns to a family story to celebrate immigration to America; another illustrates it.

In 1823, Wells’ great-great-grandfather, a talented woodcarver, leaves Bavaria to escape his father’s Orthodox Judaism and lands in New York City. While working as a bookkeeper, he fashions a rocking chair with Willkommen carved into its back. Resettling in Prairie du Chien, Wisconsin, with the chair, he begins a family, carving new words for welcome in both Hebrew and English. The chair then journeys with his daughter back to New York, where Fáílte, Irish for welcome, is added when the chair is given to an Irish servant as a wedding gift. Years later, the family story having ended, Wells turns to political turmoil and natural disaster to continue the chair’s history. Dominican nuns fleeing the Trujillo dictatorship carve Bienvenido; a Black physician brings home a baby from Haiti after its devastating earthquake and adds Akeyi. To round out the saga, a girl named Amira coming to America from a “distant land destroyed by war” is welcomed by new friends, that same chair, and a newly carved word for welcome in Arabic. Wells clearly states her strong feelings about immigration in her preface, in her author’s note, and in this deeply felt generational story of a well-used and well-loved chair. Pinkney’s signature artwork forms an inviting accompaniment with its soft lines and muted tones. (This book was reviewed digitally.)

Whether stated in one language or many, a resounding welcome to immigrants. (illustrator's note, photograph)
— Kirkus Reviews, STARRED

An inscribed cherrywood rocking chair becomes a symbol of refuge, comfort, and connection for generations of immigrants in this volume by two children’s book luminaries. The chair is created by Sam, a character based on Wells’s great-great-grandfather, who escapes an unyielding father in Bavaria, becoming a woodworker first in New York and then in Wisconsin. He carves the first three “Welcomes” on the chair: in German, as tribute to employers; in Hebrew, to commemorate his own son’s birth; and in English, because, as Sam’s daughter notes, “We are in America.” As the chair passes from family to family, more languages are added, and more stories unfold; the final welcome is inscribed by a present-day family sponsoring a young refugee of war. If Wells paints America’s historical acceptance of others with an overly broad brush, she makes her vision of the country clear. Pinkney’s elegantly textured watercolor, pencil, and pastel pictures occasionally pull back into historical sweeps, such as a covered wagon moving westward in swirling snow. But mostly he hones in on the intensely personal, capturing moments of emotional complexity and immediacy as new arrivals take the chair into their lives and America into their hearts. Back matter includes creators’ notes. Ages 4–8. (Sept.)
— Publishers Weekly

With vibrant prose and lovely art, Wells and Pinkney offer an eloquent account of the American immigrant experience, centered on a rocking chair. Wells begins with her own great-greatgrandfather, Sam, an aspiring woodworker who, rather than becoming a rabbi as his father wants, journeys from Bavaria to New York City in the early 1800s, seeking new opportunities. There, he finds work with a German family, and when their child is born, he makes them a rocking chair, inscribing it with “Willkommen”—German for welcome. Moving to Wisconsin, Sam marries, has children, and engraves welcome in Hebrew, then English on the chair. Eventually, Sam’s daughter, Helen—and the chair—return east. From there, the story expands to those of other immigrants—from nuns in the Dominican Republic escaping religious persecution, to a Haitian child finding a new loving home after natural disaster—as Wells creatively imagines the chair becoming part of their lives too. And along the way, each family adds another word for welcome to the chair. While the narrative can be somewhat lengthy, the descriptive, lovely prose and beautifully expressive illustrations in muted tones bring the settings, events, and characters to life, particularly the chair, which becomes a poignant thread connecting the varied families. Overall, a heartfelt, hope-filled portrayal of the many cultures and backgrounds that contribute to America’s cultural landscape. Wells’ preface and endnotes provide background and context, including real-life story inspirations and strong support for American immigration.
— Booklist STARRED Review

In the early nineteenth century, Sam Seigbert, Rosemary Wells’ great-great-grandfather, leaves Bavaria for New York, finding a solid job there as carpenter and bookkeeper there for the Hinzler family housewright business. When Mrs. Hinzler has a baby, Sam crafts a beautiful wooden rocking chair. The chair goes with Sam and the Hinzlers to the Midwest, where Sam meets and marries Ruth, and where the chair rocks her and their children. It goes back east when Sam’s daughter marries, and then it’s given to the Irish seamstress of the household. Eventually it’s donated to the Salvation Army, where it’s found and renovated by nuns escaping the Dominican Republic under Trujillo. After them, the chair goes to a few more American families, each time adding a new line to the many-languaged words of welcome carved on its back. There’s a folkloric flavor to this tale of an object that welcomes a sequence of North American newbies; while the chair’s trajectory is a contrivance, it works as a metaphor for the commonality of immigrant experience and needs. Pinkney’s familiar character-rich line and watercolor art moves easily through the decades and from city to country; the deep tan of the chair, often set off against slightly paler backgrounds, makes it easy to spot for kids following the visual thread. This could be a great prompt for kids to ask at home about their own family heirlooms or to create stories about the reclaimed objects in their lives. A note from the author about her family story and support of immigration and a note from the artist about his process are included.  DS
— BCCB

In The Welcome Chair, friends and acclaimed decadeslong mainstays of children’s literature Rosemary Wells and Jerry Pinkney team up to tell a moving, memorable and quintessentially American story.

Inspired by Wells’ own ancestral history, the tale begins in the early 1800s as a young Bavarian boy named Sam sets off to achieve his dreams in the United States. A carpenter’s apprentice, Sam builds a lovely rocking chair that is handed down from family to family. As the years pass, each owner adds their own legacy to the chair, carving the word for welcome in their language at the top of its back panel. The story of the chair becomes the story of its people. There’s a Civil War soldier who fights against slavery, a determined Irish immigrant, a pair of nuns from the Dominican Republic, a compassionate doctor who works for the Red Cross, an infant orphaned by an earthquake in Haiti and more.

Although The Welcome Chair has a fairly high word count for a picture book, Wells’ straightforward narration keeps the story moving. Every line is considered and earnest, and the text is full of vivid descriptions. Pinkney’s illustrations are mesmerizing and iconic, covering every page with tiny, intriguing details. There’s a sketchy feel to his linework that gives the images dimension and a historical feel that’s both inviting and thoughtful. When paired with a soft, muted color palette, the effect evokes the way we often imagine history looks. Pinkney’s ability to capture the specifics of time and place while maintaining the story’s legendary spirit is a true gift; I cannot imagine an illustrator better suited for this story.

The kind of book that deserves to become a modern classic, The Welcome Chair pulls together themes of family, hard work, compassion, kindness and community in an honest and loving way. The book ends with what feels like a pause instead of a stop, because the chair’s story—like our stories—will continue. Who else will sit in the chair and rock their baby to sleep? Who may read or do their homework, curled up on its seat? What kind of futures might we imagine while perching on its sturdy frame? A tribute to America’s history as a nation of immigrants, The Welcome Chair truly welcomes all.
— BookPage *STARRED*