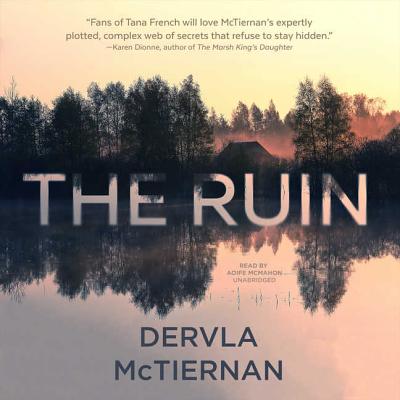 “In a thrilling debut police procedural, Dervla McTiernan's The Ruin introduces readers to honest and likeable Cormac Reilly, a 20 year veteran detective recently relocated to Galway, Ireland trying to figure out where he fits in at his new police station. Tasked with closing cold case files, Reilly's investigation of a case from his rookie days soon intersects with the current case of an apparent suicide that proves to be much more than it appears. With a detailed setting that allows visualization of the unfolding plot, McTiernan has introduced readers to a mystery that has intriguing characters and tense, suspenseful plot twists The Ruin will compel readers to keep turning the pages until they reach the satisfying conclusion that will leave them impatiently waiting for the next installment in this promising series.”
— Betsy Von Kerens, The Bookworm, ,

“This solid debut from Irish author Dervla McTiernan, a compelling story that spans two decades and multiple mysteries, examines the ways that public servants can provide resources for those in need or fail them utterly—or worse. But the core element that won my praise was McTiernan’s constant reminder of the fact that characters’ deaths leave holes in the other characters’ lives; they are not just plot devices to drive a whodunnit, but individuals who are mourned.”
— Maryelizabeth Yturralde, Mysterious Galaxy Books, San Diego, CA

It's been twenty years since Cormac Reilly discovered the body of Hilaria Blake in her crumbling Georgian home. But he's never forgotten the two children she left behind ...When Aisling Conroy's boyfriend Jack is found in the freezing black waters of the river Corrib, the police tell her it was suicide. A surgical resident, she throws herself into study and work, trying to forget--until Jack's sister Maude shows up. Maude suspects foul play, and she is determined to prove it.Cormac Reilly is the detective assigned with the re-investigation of a seemingly accidental overdose twenty years ago--the overdose of Jack and Maude's drug and alcohol addled mother. Detective Reilly is under increasing pressure to charge Maude for murder when his colleague Danny uncovers a piece of evidence that will change everything ...This unsettling small-town noir draws us deep into the dark heart of Ireland, where corruption, desperation, and crime run rife. A gritty look at trust and betrayal where the written law isn't the only one, The Ruin asks who will protect you when the authorities can't--or won't.