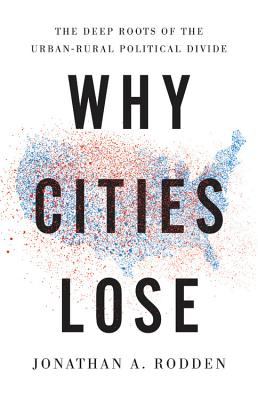 Why is it so much easier for the Democratic Party to win the national popular vote than to build and maintain a majority in Congress? Why can Democrats sweep statewide offices in places like Pennsylvania and Michigan yet fail to take control of the same states' legislatures? Many place exclusive blame on partisan gerrymandering and voter suppression. But as political scientist Jonathan A. Rodden demonstrates in Why Cities Lose, the left's electoral challenges have deeper roots in economic and political geography.

In the late nineteenth century, support for the left began to cluster in cities among the industrial working class. Today, left-wing parties have become coalitions of diverse urban interest groups, from racial minorities to the creative class. These parties win big in urban districts but struggle to capture the suburban and rural seats necessary for legislative majorities. A bold new interpretation of today's urban-rural political conflict, Why Cities Lose also points to electoral reforms that could address the left's under-representation while reducing urban-rural polarization.

Jonathan A. Rodden is professor of political science and a senior fellow at the Hoover Institution at Stanford University and founder and director of the Stanford Spatial Social Science Lab. The author of the prizewinning Hamilton's Paradox, he lives in Stanford, California.

"Why Cities Lose is a towering achievement in understanding the structural roots of partisan polarization in America and the critical role played by economic and political geography. Jonathan A. Rodden employs sophisticated historical, comparative, and data visualization techniques to shed light on the fateful consequences for political representation and policy of single-member, first-past-the-post legislative districts. It is certain to enrich scholarly and public debates."—Thomas E. Mann, coauthorof It's Even Worse Than It Looks

"The biggest problem facing America today is political polarization: Democrats command the superstar cities and tech hubs that drive the knowledge economy, while Republicans have a stronghold in suburban places and rural areas. In this important book, Jonathan A. Rodden draws on a trove of data spanning the twentieth century to show us in painstaking detail why cities continue to lose out to rural and suburban interests and what challenges this poses for our democracy."—Richard Florida, author of The Rise of the Creative Class and The New Urban Crisis

"Why Cities Lose is a masterful explanation for the main axis of conflict in contemporary US politics, the rural vs. urban divide. With exemplary scholarship and an eye to global trends as well as surprisingly important details such as the placement of railroads, Rodden gives us a thorough understanding of the central political conflicts of our time."—Katherine J. Cramer,author of The Politics of Resentment

"This important book, which should reset our understanding of polarization in America and around the world, will comfort neither those on the left who see themselves as the vanguard of a victorious electoral future, nor those on the right who believe that voters are fundamentally conservative."—Andrew Gelman, author of Red State, Blue State, Rich State, Poor State

"This astute and illuminating book will change how you think about electoral fairness and political representation in America. Why Cities Lose meticulously demonstrates how winner-take-all congressional districts systematically under-represent urban voters in legislatures and destructively polarize politics along urban-rural lines -- not just in the United States, but also in Canada and the United Kingdom. The result is distorted representation in all winner-take-all democracies, even those with independent redistricting processes. At time when politics in America feels so unfair, this book clarifies how much our skewed electoral system is to blame. For anyone who wants to fix America's broken politics, this is absolutely essential reading."—Lee Drutman, author of The Business of America is Lobbying