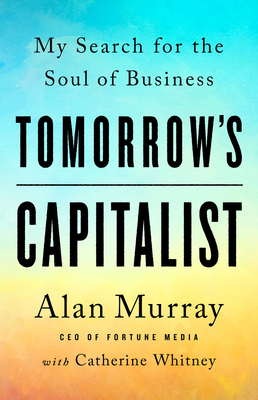 In an era of political and cultural extremism, America’s corporate leaders have emerged as the pragmatic center of a movement for social and economic progress.

The core tenets of a capitalist system that dominated the world for more than a century are being challenged as never before. Narratives about the failures of capitalism, the greed of the 1 percent, and the blindness of corporations to public need have made their mark and are driving change. These aren’t the superficial cosmetic fixes that generated so much cynicism in the past, but a revolution in the way corporations are imagined and run.

Tomorrow’s Capitalist reveals how corporate CEOs—the ultimate pragmatists—realized that they could lose their “operating license” unless they tackle the fundamental issues of our time: climate, diversity and inclusion, and inequality and workforce opportunity. Responding to their employees and customers who are demanding corporate change, they have taken the lead in establishing the bold new principles of stakeholder capitalism, ensuring that for the first time in more than a half a century it is not just shareholders who have a say in how corporations are run.

Alan Murray vividly captures the zeitgeist of the real and compelling dynamic that is transforming much of the corporate world.

Alan Murray is CEO of Fortune Media. He oversees the business and editorial operations of the independent media company and is known for expanding its digital and conference franchises.  Murray also writes a closely-read daily newsletter, the Fortune CEO Daily.  Prior to joining Fortune in 2015, Murray led the rapid expansion of the Pew Research Center’s digital footprint as president of that organization.  Before that, Murray was at the Wall Street Journal for many years, serving as Deputy Managing Editor, Executive Editor Online, Washington Bureau Chief, and author of the Political Capital and Business columns. He served for several years as Washington bureau chief for CNBC, and cohost of the nightly show Capital Report.  He is the co-author of the classic Showdown at Gucci Gulch:  Lawmakers, Lobbyists, and the Unlikely Triumph of Tax Reform.

“With decades of experience studying, investigating, and educating the public about business and capitalism, Alan Murray has tapped into a fundamental truth—one that is both pragmatic and moral: Companies can only grow and prosper if they invest in their employees, serve their customers, support their communities, and recognize their responsibility to help lift up all of society—rather than ignore or ‘drive by’ those who have been left behind. Murray gets it, and in Tomorrow’s Capitalist he lays it out in a compelling, thought-provoking work that can benefit every budding capitalist and business leader.”—Jamie Dimon, chairman and CEO, JP Morgan Chase

“Is the shift to stakeholder capitalism for real? Could business indeed discover a moral compass? Drawing on hundreds of conversations with the world’s leading CEOs, Murray makes the case that we are living through a moment of profound change in how business leaders understand their role, and argues that this shift is already changing the way that business operates.”—Rebecca Henderson, John and Natty McArthur University Professor, Harvard University, and author of Reimagining Capitalism in a World on Fire

“Alan Murray illuminates the path for anyone who aspires to be on the right side of the history of capitalism. From his unique vantage point, Murray paints an inspiring portrait of how business can and ought to work—and of how leaders can and ought to lead—in our now-fused world where political, social, environmental, biological, ethical, and moral issues that were once considered tangential to an organization’s agenda are increasingly viewed as inescapably at the center of it. Murray assembles the right playbook for what business does best—innovating at scale—but designed to meet the imperatives of a post-pandemic world: creating value by truly serving people and putting their concerns and hopes at the core of operations.”—Dov Seidman, author of How and founder and chairman, LRN and the HOW Institute for Society

“Practical, hopeful, and convincing. A must-read for all in leading positions who want to seize the biggest opportunity we have of our times and position themselves well for a prosperous future. As more companies commit themselves to a purpose larger than profits, there is increasing evidence that it might be to the shareholders’ best interest as well.”—Paul Polman, cofounder and chair, IMAGINE, and former CEO, Unilever

“Alan Murray’s keen insight, gleaned from decades of in-depth conversations with corporate leaders and his own shrewd, front-row observations of the shifting priorities of American business, is on abundant display in Tomorrow’s Capitalist. His surgical dissection of the motives and pressures driving decision-making at the heart of capitalism, combined with often warm (but always revealing) firsthand anecdotes finds there is reason to hope.”—Ginni Rometty, former chair, president, and CEO, IBM

“No American journalist has a keener understanding of the interrelationships between business, public policy, and society than Alan Murray. In this landmark work, he shares all he has learned in forty years as a premier economic journalist. Murray has the rare quality of balance in these polarized times as he assays all that is transpiring in the business world and what it means.”—Lawrence H. Summers, Charles W. Eliot University Professor and president emeritus, Harvard University, and former secretary of the treasury under President Clinton

“In Tomorrow’s Capitalist, Alan Murray shows us that profit needn’t be separated from purpose. It’s a false choice. The task now is to answer which principles will shape capitalism 2.0.”—Satya Nadella, executive chairman and CEO, Microsoft

“Alan Murray is at the vanguard of rethinking capitalism to meet the great challenges of our times. He has convened global leaders across sectors, asked the difficult questions, and led the rigorous and honest dialogue that is necessary for change. Tomorrow’s Capitalist is the compelling story of Murray’s journey at the center of this critical discussion, and it is required reading for all who believe that capitalism needs an upgrade. Through his belief in the possibilities of capitalism and the clarity of his call to action, Murray inspires and challenges all of us to do better.”—Dan Schulman, president and CEO, PayPal

“Many CEOs today are listening more deeply to all their stakeholders and asking themselves: What can I do to improve the state of our world? Tomorrow’s Capitalist captures this critical move toward a new capitalism that is more equal, fair, and sustainable, where profit and purpose go hand-in-hand, and business can be the greatest platform for change.”—Marc Benioff, chair and co-CEO, Salesforce

“Business as usual is over. The journey forward—which Murray expertly captures in this book—starts with realizing we’re all part of an interconnected system. And then it requires putting the tools of business to work constructing a stronger, safer, more inclusive, and more sustainable future. There’s much work to be done and we’re going to need a lot of shoulders at the wheel to do it.”—Ajay Banga, former CEO and executive chair, Mastercard

“Insightful. Alan Murray leverages his years of business journalism to describe how the relationship between business and society is being redefined in the current world. A must-read.”—Indra Nooyi, former CEO and chair, PepsiCo, and author of My Life in Full

“The role that business must play in our society has never been more important. Alan Murray saw this early and has been a compelling voice to inspire CEOs to lead in these areas. Tomorrow’s Capitalist captures the challenges and lays out a clear path forward.”—John Donahoe, CEO, Nike