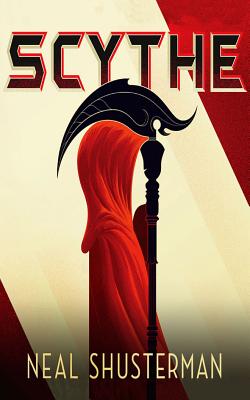 Neal Shusterman has done it again! He writes books that will delight teens and adults alike without talking down to the younger bracket of his readers. His stories are complex and deal with grim realities in the most elegant ways. In a world where death has been conquered and a group of people known as Scythes are responsible for culling the population to ensure that the world remains stable anything is possible. Once I began this book, everything else I had to do I did grudgingly, wanting more than anything to spend uninterrupted reading time in this new world. The world of this novel is so fully realized. Shusterman thought of it all, from the technologies that would power his future society to the slang people would use and new ways they would get themselves into trouble. The characters inner life is rich and conflicted which makes for a great read. Simply put this book is brilliant!

Two teens must learn the "art of killing" in this Printz Honor-winning book, the first in a chilling new series from Neal Shusterman, author of the New York Times best-selling Unwind Dystology series.

A world with no hunger, no disease, no war, no misery: Humanity has conquered all those things and has even conquered death. Now Scythes are the only ones who can end life - and they are commanded to do so in order to keep the size of the population under control.

Citra and Rowan are chosen to apprentice to a scythe - a role that neither wants. These teens must master the "art" of taking life, knowing that the consequence of failure could mean losing their own.

Scythe is the first novel of a thrilling new series by National Book Award-winning author Neal Shusterman in which Citra and Rowan learn that a perfect world comes only with a heavy price.