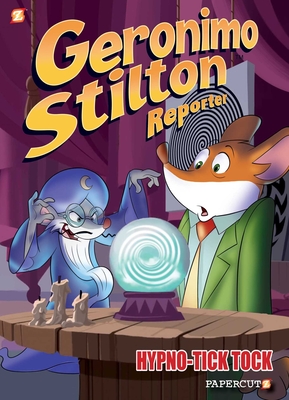 This is book number 8 in the Geronimo Stilton Reporter Graphic Novels series.

Geronimo Stilton, crusading news reporter and editor of The Rodent’s Gazette, has been working too much and is in desperate need of a break. He is getting sleepy, very sleepy, but he can’t actually fall asleep. Geronimo’s cousin Trap tells him about a specialist, the Great Ratswami, who hypnotizes mice to help them relax. Shortly after Geronimo’s meeting with the hypnotist, New Mouse City is plagued by a crime wave and Geronimo seems even more tired than ever! Something weird is going in New Mouse City, and the totally shocking answer will become front-page news!

Born in New Mouse City, Mouse Island, GERONIMO STILTON is Rattus Emeritus of Mousomorphic Literature and of Neo-Ratonic Comparative Philosophy. He is the director of The Rodent's Gazette, New Mouse City's most widely read daily newspaper. Stilton was awarded the Ratitzer Prize for his scoops on The Curse of the Cheese Pyramidand The Search for Sunken Treasure. One of his bestsellers won the 2002 eBook Award for world's best-selling electronic book. In 2006 he won a Nickelodeon Kids Choice Award and in 2008 he won the Cartoomics prize "Beyond Comics." His works have been published all over the globe. In his spare time, Mr. Stilton collects antique cheese rinds.
My Account • Sign In • Sign Out • Register
NEW & USED BOOKS
AUTHOR EVENTS • GIFTS
Tempe
6428 South McClintock Drive
480.730.0205
[Google Map]
Sunday-Friday 10am-8pm
Saturday 9am-8pm
Trade Counter 11am-6pm daily