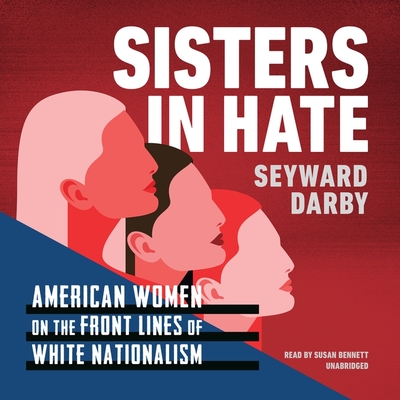 A revealing, unsettling portrait of white nationalism, told through the lives of three women whose experiences with far-right extremism offer a new understanding of America today.After the election of Donald J. Trump, journalist Seyward Darby went looking for the women of the so-called alt-right-really, just white nationalism with a new label. The mainstream media depicted the alt-right as a bastion of angry white men, but was it? As women headlined resistance to the Trump administration's bigotry and sexism, most notably at the Women's Marches, Darby wanted to know why others were joining a movement espousing racism and anti-feminism. Who were these women, and what did their activism reveal about America's past, present, and future? Darby researched dozens of women across the country before settling on three-Corinna Olsen, Ayla Stewart, and Lana Lokteff. Each was born in 1979, and became a white nationalist in the post-9/11 era. Their respective stories of radicalization upend much of what we assume about women, politics, and political extremism.Corinna, a professional embalmer who was once a body builder, found community in white nationalism before it was the alt-right, while she was grieving the death of her brother and the end of a marriage. Eventually, she decided to leave the movement and served as an informant for the FBI. For Corinna, hate was more than just personal animus-it could also bring people together.Ayla, a devoutly Christian mother of six, underwent a personal transformation from self-professed feminist to far-right online personality. Her identification with the burgeoning tradwife movement reveals how white nationalism traffics in society's preferred, retrograde ways of seeing women.Lana, who runs a right-wing media company with her husband, enjoys greater fame and notoriety than some of her sisters in hate. Her work disseminating and monetizing far-right dogma is a testament to the power of disinformation. With acute psychological insight and eye-opening reporting, Darby steps inside the contemporary hate movement and draws connections to precursors like the Ku Klux Klan. Far more than mere helpmeets, women like Corinna, Ayla, and Lana have been sustaining features of white nationalism. Sisters in Hate shows how the work that women do to normalize and propagate racist extremism has consequences well beyond the hate movement.