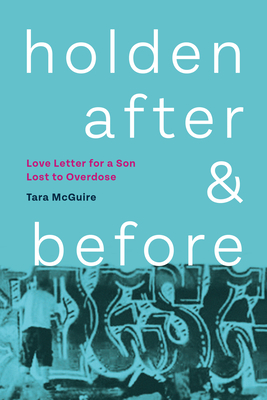 Holden, After and Before is a moving meditation on grief in the same vein as Helen Macdonald's H is for Hawk: a stunning book that traces Tara McGuire's excavation and documentation of the life path of her son Holden, a graffiti artist who died of an accidental opioid overdose at the age of twenty-one. Beginning with Holden's death and leaping through time and space, McGuire employs fact, investigation, memory, fantasy, and even fabrication in her search for understanding not only of her son's tragic death, but also his beautiful life. She navigates and writes across the many blank spaces to form a story of discovery and humanity, examining themes of grief, pain, mental illness, trauma, creative expression, identity, and deep, unending love inside just one of the thousands of deaths that have occurred as a result of the opioid crisis.
With poignant honesty and a heart laid bare, Holden, After and Before is a beautiful and moving elegy to a son lost to overdose.

Tara McGuire is a former broadcaster turned writer whose essays and poetry have appeared in several magazines and on CBC Radio. She is a graduate of The Writers Studio at Simon Fraser University, and holds an MFA from the University of British Columbia School of Creative Writing.