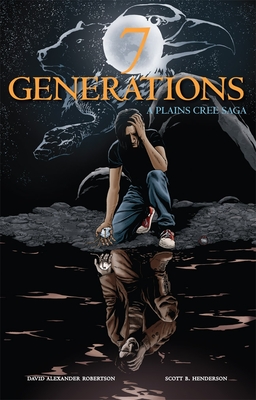 Illustrated in vivid colour, 7 Generations: A Plains Cree Saga is an epic story that follows one Indigenous family over three centuries and seven generations. This compiled edition was originally published as a series of four graphic novels: Stone, Scars, Ends/Begins, and The Pact.

Stone introduces Edwin, a young man who must discover his family's past if he is to have any future. Edwin learns of his ancestor, Stone, a Plains Cree warrior who came of age in the early 19th century. When Stone's older brother is tragically killed during a Blackfoot raid, he must overcome his grief to avenge his brother's death.

In Scars, the story of White Cloud, Edwin's ancestor, is set against the smallpox epidemic of 1870-1871. After witnessing the death of his family one by one, White Cloud must summon the strength to find a new home and deliver himself from the terrible disease.

In Ends/Begins, readers learn about Edwin's father James and his experiences in a residential school. In 1964, two brothers are taken from the warm and loving care of their grandparents, and spirited away to a residential school. When James discovers the anguish that his little brother is living under, it leads to unspeakable tragedy.

In The Pact, the guilt and loss of James's residential school experiences follow him into adulthood, and his life spirals out of control. Edwin, mired in the desolation of his fatherless childhood, struggles to heal. As James navigates his own healing, he realizes, somehow, he must save his son's life--as well as his own.

Find ideas for using this book in your classroom in the FREE Teacher's Guide for 7 Generations.

David A. Robertson is an award-winning writer. His books include When We Were Alone (winner Governor General's Literary Award), Will I See? (winner Manuela Dias Book Design and Illustration Award Graphic Novel Category), Betty, The Helen Betty Osborne Story (listed In The Margins), and the YA novel Strangers. David educates as well as entertains through his writings about Indigenous Peoples in Canada, reflecting their cultures, histories, communities, as well as illuminating many contemporary issues. David is a member of Norway House Cree Nation. He lives in Winnipeg. Scott Henderson has worked as an illustrator for comics, portraiture, and advertising art. He is author/illustrator of the sci-fi/fantasy comic, The Chronicles of Era and has illustrated two comics for the Canadian Air Force's For Valour series, the bestselling graphic novel series 7 Generations, selected titles from the Tales From Big Spirit series, and the graphic novels, Betty: The Helen Betty Osborne Story and Eisner-award nominee, A Blanket of Butterflies.