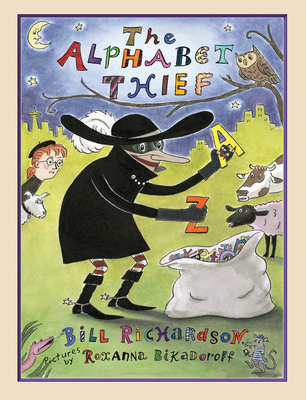 The alphabet thief stole all of the B's, and all of the bowls became owls...
When night falls, along comes a peculiar thief who steals each letter of the alphabet, creating a topsy-turvy world as she goes. It seems that no one can stop her, until the Z's finally send her to sleep so that all the other letters can scamper back to where they belong.
Bill Richardson's zany rhymes and Roxanna Bikadoroff's hilarious illustrations will delight young readers with the silly fun they can have with language -- and may even inspire budding young writers and artists to create their own word games.

Bill Richardson, winner of Canada's Stephen Leacock Memorial Medal for Humour and former CBC Radio personality and author, has written several highly acclaimed books for children. They include The Aunts Come Marching, illustrated by Cynthia Nugent, winner of the Time to Read Award (distributed to schools throughout British Columbia) and the children's novel After Hamelin, winner of the Ontario Library Association's Silver Birch Award. Bill lives in Vancouver. Roxanna Bikadoroff's illustrations have been published internationally for more than twenty-five years. She has won numerous awards, many of them National Magazine Awards, including Best Illustration (Gold). She recently collaborated with Bill Richardson on a collection of poems for adults. This is her first children's book. Roxanna lives in Vancouver.
My Account • Sign In • Sign Out • Register
NEW & USED BOOKS
AUTHOR EVENTS • GIFTS
Tempe
6428 South McClintock Drive
480.730.0205
[Google Map]
10am-7pm daily
Trade Counter 11am-6pm daily