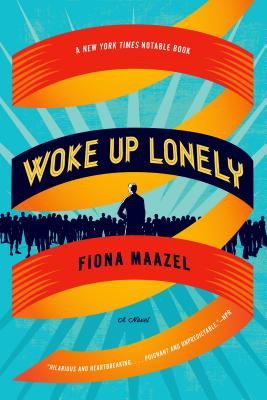 Fiona Maazel writes like an angel—and prods and stabs like a devil. Woke Up Lonely is a torrent of narrative energy, rich with observation and incident, all of it shot through with a sad, savage humor that had me laughing and wincing at the same time. Maazel brilliantly taps into the sinking feeling that, even in wired and socially networked America, we're all in this together, alone

* Shortlisted for the Believer Book Award *
Fiona Maazel's Woke Up Lonely follows a cult leader, his ex-wife, and the four people he takes hostage. It's about loneliness in America, North Korea, espionage, a city underneath Cincinnati, cloud seeding, and eavesdropping. It's also a big, sweeping love story.

Fiona Maazel is the author of Last Last Chance and Woke Up Lonely. She is a winner of the Bard Prize for Fiction and a National Book Foundation 5 Under 35 honoree. She teaches at Brooklyn College, Columbia, New York University, and Princeton. She lives in Brooklyn.

“[A] sprawling, intimate novel, which is a perfectly poised screen-capture of hyper-modernity.” —The Believer Book Award, Editors' Shortlist

“Maazel's insights are as sound as her imagination is wild.” —Oprah.com, Book of the Week

“The talented Maazel has plenty of imagination.” —USA Today

“Uniformly entertaining . . . It's thrilling to imagine what Fiona Maazel might do next.” —The Boston Globe

“Woke Up Lonely is another wunderkammer, a deeply felt and wildly original novel that repays the attention it demands, and once read won't soon be forgotten.” —Bookforum

“One of the best pieces of fiction and social satire of the year.” —The Millions

“Maazel takes a cue from Kurt Vonnegut by creating a novel that blends the plot of a dramatic thriller with wacky humor and bits of science fiction.” —BUST