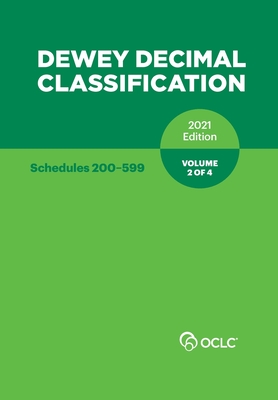 2021 version of the Dewey Decimal Classification.

Classification: What It Is and What It Does

Classification provides a system for organizing knowledge. Classification may be used to organize knowledge represented in any form, e.g., books, documents, electronic resources. Notation is the system of symbols used to represent the classes in a classification system. In the Dewey Decimal Classification, the notation is expressed in Arabic numerals. The notation gives both the unique meaning of the class and its relation to other classes. The notation provides a universal language to identify the class and related classes, regardless of the fact that different words or languages may be used to describe the class.

History, Current Use, and Development of the Dewey Decimal Classification

The Dewey Decimal Classification-conceived by Melvil Dewey in 1873 and first published in 1876-is a general knowledge organization tool that is continuously revised to keep pace with knowledge. The system is further extended through number building, interoperable translations, association with categorized content, and mappings to other subject schemes.

The DDC is published by OCLC, Inc. The DDC is accessed through WebDewey, a frequently updated subscription service maintained by OCLC. OCLC owns all copyright rights in the Dewey Decimal Classification and licenses the system for a variety of uses.

The DDC is the most widely used classification system in the world. Libraries in more than 138 countries use the DDC to organize and provide access to their collections, and DDC numbers are featured in the national bibliographies of more than sixty countries. Libraries of every type apply Dewey numbers on a daily basis and share these numbers through a variety of means (including WorldCat). Dewey is also used in a variety of applications on the web in support of categorization, browsing, and retrieval.

The DDC has been translated into over thirty languages. Since 1988, authorized translations of the full and abridged editions of the DDC have been published or are under way in Arabic, French, German, Greek, Hebrew, Icelandic, Indonesian, Italian, Norwegian, Russian, Spanish, Swedish, Turkish, and Vietnamese. The DDC Summaries, the top three levels of the Dewey Decimal Classification system, have been translated into Afrikaans, Arabic, Chinese, Czech, French, German, Hebrew, Italian, Norwegian, Portuguese, Russian, Spanish, Swedish, and Vietnamese.

One of Dewey's great strengths is that the system is developed and maintained in a national bibliographic agency, the Library of Congress. The Dewey editorial office is located in the Dewey Section of the Library of Congress, where classification specialists annually assign over 60,000 DDC numbers to records for works cataloged by the Library. Having the editorial office within the Dewey Section enables the editors to detect trends in the literature that must be incorporated into the Classification. The editors prepare proposed schedule revisions and expansions and forward the proposals to the Decimal Classification 3 Editorial Policy Committee (EPC) for review and recommended action.

EPC is a ten-member international board whose main function is to advise the editors and OCLC on matters relating to changes, innovations, and the general development of the Classification. EPC represents the interests of DDC users; its members come from national, public, special, and academic libraries, and from library schools.