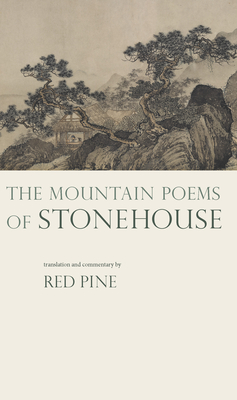 Winner of the 2015 Washington State Book Award in Poetry Translation

"The Mountain Poems of Stonehouse is] a tough-spirited book of enlightened free verse."--Kyoto Journal

The Zen master and mountain hermit Stonehouse--considered one of the greatest Chinese Buddhist poets--used poetry as his medium of instruction. Near the end of his life, monks asked him to record what he found of interest on his mountain; Stonehouse delivered to them hundreds of poems and an admonition: "Do not to try singing these poems. Only if you sit on them will they do you any good."

Newly revised, with the Chinese originals and Red Pine's abundant commentary and notes, The Mountain Poems of Stonehouse is an essential volume for Zen students, readers of Asian literature, and all who love the outdoors.

Stonehouse was born in 1272 in Changshu, China, and took his name from a cave at the edge of town. He became a highly respected dharma master in the Zen Buddhist tradition.

Red Pine is one of the world's leading translators of Chinese poetry. "Every time I translate a book of poems," he writes, "I learn a new way of dancing. And the music has to be Chinese." He lives near Seattle, Washington.

Stonehouse Stonehouse was born in 1272 in Changshu, and took his name form a cave at the edge of town. During his lifetime, he became a highly respected Dharma Master in the Zen Buddhist Tradition. It was not until later life that he composed his poetry in seclusion on the mountainside of Hsiamushan. Since then his poems have remained mostly unknown in even his home country of China. Stonehouse appeared in a few anthologies throughout the centuries, but it was not until being translated into English that his poems began to receive the recognition that they deserve. Red Pine Bill Porter assumes the pen name Red Pine for his translation work. He was born in Los Angeles in 1943, grew up in the Idaho Panhandle, served a tour of duty in the U.S. Army, graduated from the University of California with a degree in anthropology, and attended graduate school at Columbia University. Uninspired by the prospect of an academic career, he dropped out of Columbia and moved to a Buddhist monastery in Taiwan. After four years with the monks and nuns, he struck out on his own and eventually found work at English-language radio stations in Taiwan and Hong Kong, where he interviewed local dignitaries and produced more than a thousand programs about his travels in China. Red Pine's published translations include The Collected Songs of Cold Mountain, for which he was awarded the WESTAF Award in Translation; Poems of the Masters; In Such Hard Times, which recieved the 2010 Lucien Stryk Asian Translation Prize; The Poetry of Wei Ying-wu; Lao-tzu's Taoteching; The Zen Works of Stonehouse (Shih-wu); Guide to Capturing a Plum Blossom by Sung Po-jen, for which he was awarded a PEN West translation prize; and The Zen Teachings of Bodhidharma. He is also the author of Zen Baggage and Road to Heaven: Encounters with Chinese Hermits. He lives in Port Townsend, Washington.
My Account • Sign In • Sign Out • Register
NEW & USED BOOKS
AUTHOR EVENTS • GIFTS
Changing Hands Tempe
6428 S McClintock Dr, Tempe, AZ 85283
480.730.0205
[Google Map]
Sun-Sat: 10am-7pm