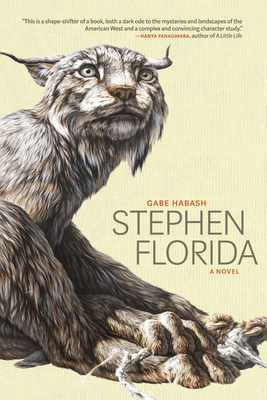 Don’t assume you know Stephen Florida.  Because just when you think you do.....he proves you wrong.  From the time I picked up this book until I turned the final page...it contradicted all the assumptions I was making.  Looking at the cover, I  thought...sci-fi fantasy.  But nope, it is about a fiercely competitive college wrestler.  Was Stephen’s story going to be the heartwarming tale of a challenged young man overcoming obstacles in his life?  Well, yes.  Until ten pages later when I would find his actions unconscionable.  And so it went throughout the book.  You are going to be thinking about this character and how you feel about him long after you put the book aside.  A complex compelling story with no easy or expected solutions.

“Spanning a college wrestler's senior season, Stephen Florida is eerie, unsettling, and unlike anything else. It can be hard to live in Stephen's head, but it is impossible to stop reading or to forget what you find there. Stephen is unpredictable, sympathetic, focused, frenzied, cold, and tender. He is hard to love, yet I love him. We are lucky to have a new novel like this: something you haven't seen before, that makes you remember what good fiction is capable of.”
— Tyler Goodson (E), Avid Bookshop, Athens, GA

In Stephen Florida, Gabe Habash has created a coming-of-age story with its own, often explosive, rhythm and velocity. Habash has a canny sense of how young men speak and behave, and in Stephen, he's created a singular character: funny, ambitious, affecting, but also deeply troubled, vulnerable, and compellingly strange. This is a shape-shifter of a book, both a dark ode to the mysteries and landscapes of the American West and a complex and convincing character study.
--Hanya Yanagihara, author of A Little Life

Foxcatcher meets The Art of Fielding, Stephen Florida follows a college wrestler in his senior season, when every practice, every match, is a step closer to greatness and a step further from sanity. Profane, manic, and tipping into the uncanny, it's a story of loneliness, obsession, and the drive to leave a mark.

Gabe Habash is the fiction reviews editor for Publishers Weekly. He holds an MFA from New York University and lives in New York.