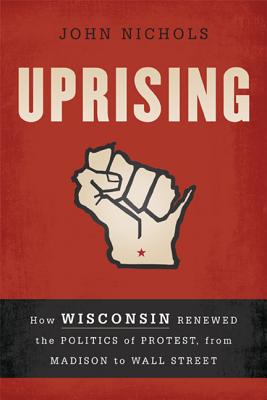 On February 11, 2011, Wisconsin Governor Scott Walker announced he would strip collective bargaining rights from public employees and teachers. In response, people rose up in mass protest, and Wisconsin became a reference point for a renewal of labor militancy and radical politics. These protests elicited extensive national media coverage, and drew more attention from the general public than any American labor struggle in decades.

John Nichols's Uprising traces the roots of this struggle -- which has faced legislative disappointments, legal challenges, and dramatic electoral twists and turns -- and in the process reveals how Scott Walker rose to national prominence and went on to become a frontrunner in the Republican race for the nomination in 2016. At a time when public services are under assault from corporate privatizers and billionaire political donors, the public repudiation of Walker's efforts (and the shadowy interests like the Koch Brothers behind them) has translated into a broader challenge to corporate America, Wall Street, the far Right, and its media echo chamber.

John Nichols is the national affairs writer for the Nation magazine and a contributing writer for the Progressive and In These Times. He is also the associate editor of the Capital Times, the daily newspaper in Madison, Wisconsin, and a cofounder of the media-reform group Free Press. A frequent commentator on American politics and media, he has appeared often on MSNBC, NPR, BBC and regularly lectures at major universities on presidential administrations and executive power. The author of ten books and has earned numerous awards for his investigative reports, including groundbreaking examinations (in collaboration with the Center for Media and Democracy) of the Koch brothers and the American Legislative Exchange Council.

“An engrossing, informative take on the mass demonstrations that broke out in Wisconsin in early 2011…. [T]his book is well researched and full of keen insights about the state of organized labor and the power of protest…. Nichols is a capable and energetic narrator with a reporter's knack for getting to the heart of the matter….Richly detailed and inspiring—worth reading for anyone interested in organized labor, civil disobedience or the spirit of Wisconsin.”


“I have such respect for the way John Nichols gets into a story, with his sense of history, his broad perspective and his passion for telling the stories of real people involved in real struggles. That's what he has brought to the story of the Wisconsin struggle, and of the renewal of labor and social justice movements in America.”