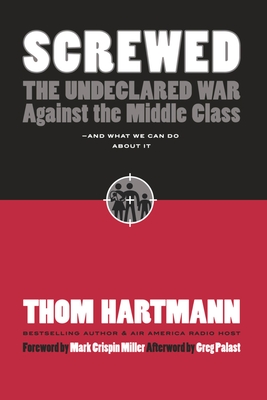 Millions of working Americans talk, act, and vote as if their economic interests match those of the megawealthy, the multinational corporations, and the politicians who do their bidding. How did this happen? According to Air America radio host Thom Hartmann, the apologists of the Right have become masters of the subtle and largely subconscious aspects of political communication. It’s not an escalation in Iraq, it’s a surge; it’s not the inheritance tax, it’s the death tax; it’s not drilling for oil, it’s exploring for energy.

Conservatives didn’t intuit the path to persuasive messaging—they learned these techniques. There is no reason why progressives can’t learn them too. In Cracking the Code, Hartmann shows you how. Drawing on his background as a psychotherapist and advertising executive as well as a national radio host, he breaks down the science and technology of effective communication so you can apply it to your own efforts to counter right-wing disinformation. It’s both an art and a science—as Hartmann explains, political persuasion is as much about biology as ideology, about knowing how the brain processes information and how that influences the way people perceive messages, make decisions, and form a worldview.

Throughout the book, Hartmann shows you precisely how to master this technology, providing examples dating back to the time of the Founding Fathers. As you read deeply in this book, you’ll see things you hadn’t realized were there—in everything from advertising to political rants—and discover abilities you didn’t know you had. Whether you’re a politician, an activist, a volunteer, or a concerned citizen, you’ll develop a strong sense for how to reach into that part of the collective human psyche where we truly do have the power to create a new world.

Thom Hartmann is the host of a nationally syndicated Air America Radio program and is the author of eighteen books, including The Last Hours of Ancient Sunlight: The Fate of the World and What We Can Do Before It’s Too Late; We the People: A Call to Take Back America; What Would Jefferson Do?, and Unequal Protection: The Rise of Corporate Dominance and the Theft of Human Rights.

“I think many of us recognize that for all but the wealthiest, life in America is getting increasingly hard. Screwed explores why, showing how this is no accidental process, but rather the product of conscious political choices, choices we can change with enough courage and commitment. Like all of Thom’s great work, it helps show us the way forward.”
—Paul Loeb, author of Soul of a Citizen and The Impossible Will Take a Little While

“Once again, Thom Hartmann hits the bull’s eye with a much needed exposé of the so-called ‘free market.’ Anyone concerned about the future of our nation needs to read Screwed now.”
—Michael Toms, Founding President, New Dimensions World Broadcasting Network and author of A Time For Choices: Deep Dialogues for Deep Democracy

“If we are going to live in a Democracy, we need to have a healthy middle class.  Thom Hartmann shows us how the ‘cons’ have wronged this country, and tells us what needs to be done to reclaim what it is to be American.”
— Eric Utne, Founder, Utne magazine

“Thom Hartmann’s book explains in simple language and with concrete research the details of the Neo-con’s war against the American middle class. It proves what many have intuited and serves to remind us that without a healthy, employed, and vital middle class, America is no more than the richest Third World country on the planet.”
— Peter Coyote, Actor and author of Sleeping Where I Fall

“The powers that be are running roughshod over the powers that OUGHT to be. Hartmann tells us what went wrong — and what you and I can do to help set American right again.”
—Jim Hightower, National Radio Commentator, Writer, Public Speaker, and author of the bestselling Thieves in High Places

“Hartmann speaks with the straight talking clarity and brilliance of a modern day Tom Paine as he exposes the intentional and systematic destruction of America’s middle class by an alliance of political con artists and outlines a program to restore it. This is Hartmann at his best. Essential reading for those interested in restoring the institution that made America the envy of the world.”
— David C. Korten, author of The Great Turning and When Corporations Rule the World