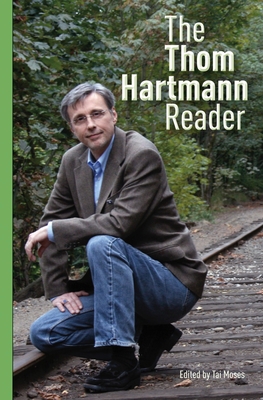 Hartmann is perhaps best known for his fierce commitment to Jeffersonian democracy and his steadfast opposition to the corporatization of America. But in these pages you’ll also discover his Older and Younger Cultures hypothesis, which identifies the root cause of so many of our social and environmental ills. You’ll hear from Hartmann on how to keep our schools from treating children like assembly line products, why attention deficit disorder is not an affliction, what cloudy Germany can teach us about solar energy, and much more.

Fascinating as these essays are, they’re ultimately meant to inspire you to action. As Hartmann says at the end of every radio program, “Get out there, get active! Tag, you’re it!

Thom Hartmann is the New York Times bestselling author of over twenty books that have been translated into seventeen languages. A four-time Project censored award winner, he is America's number one progressive radio host, heard on over 100 stations and seen live on Free Speech TV Network. He's been a successful entrepreneur; has helped start relief programs in Uganda, Colombia, Russia, Israel, India and Australia; and is a groundbreaking innovator in psychotherapy. He worked with the Dalai Lama, had a private audience with Pope John Paul II, and has taught marketing to Fortune 500 companies, nonprofits, and the National Security Agency.

“Thom Hartmann seeks out interesting subjects from such disparate outposts of curiosity that you have to wonder whether or not he uncovered them or they selected him.”
—Leonardo DiCaprio, actor, producer, and environmental activist

“Never one to shy away from the truth, Thom Hartmann’s collected works are inspiring, wise, and compelling. His work lights the way to a better America.”
—Van Jones, cofounder of RebuildTheDream.com and author of The Green Collar Economy

“Thom Hartmann channels the best of the American Founders with voice and pen. His deep attachment to a democratic civil society is just the medicine America needs. “
—Tom Hayden, author of The Long Sixties and director, Peace and Justice Resource Center.

“Thom Hartmann is a literary descendent of Ben Franklin and Tom Paine. His unflinching observations and deep passion inspire us to explore contemporary culture, politics, and economics; challenge us to face the facts of the societies we are creating; and empower us to demand a better world for our children and grandchildren.”
—John Perkins, author of the New York Times bestselling book Confessions of an Economic Hit Man

“Thom is a national treasure. Read him, embrace him, learn from him, and follow him as we all work for social change.”
—Robert Greenwald, political activist and founder and president of Brave New Films

“Right through the worst of the Bush years and into the present, Thom Hartmann has been one of the very few voices constantly willing to tell the truth. Rank him up there with Jon Stewart, Bill Moyers, and Paul Krugman for having the sheer persistent courage of his convictions.”
—Bill McKibben, author of Eaarth

“With the ever-growing influence of corporate CEOs and their right-wing allies in all aspects of American life, Hartmann’s work is more relevant than ever. Throughout his career, Hartmann has spoken compellingly about the value of people-centered democracy and the challenges that millions of ordinary Americans face today as a result of a dogma dedicated to putting profit above all else. This collection is a rousing call for Americans to work together and put people first again.”
—Richard Trumka, President, AFL-CIO

“Through compelling personal stories, Hartmann presents a dramatic and deeply disturbing picture of humans as a profoundly troubled species. Hope lies in his inspiring vision of our enormous unrealized potential and his description of the path to its realization.”
—David Korten, author of Agenda for a New Economy, The Great Turning, and When Corporations Rule the World

“Thom Hartmann is a creative thinker and committed small-d democrat. He has dealt with a wide range of topics throughout his life, and this book provides an excellent cross section. The Thom Hartmann Reader will make people both angry and motivated to act.”
—Dean Baker, economist and author of Plunder and Blunder, False Profits, and Taking Economics Seriously

“In an age rife with media-inspired confusion and political cowardice, we yearn for a decent, caring, deeply human soul whose grasp of the problems confronting us provides a light by which we can make our way through the quagmire of lies, distortions, pandering, and hollow self-puffery that strips the American Dream of its promise. How lucky we are, then, to have access to the wit, wisdom, and willingness of Thom Hartmann, who shares with us here that very light, grown out of his own life experience.”
—Mike Farrell, actor, political activist, and author of Just Call Me Mike and Of Mule and Man