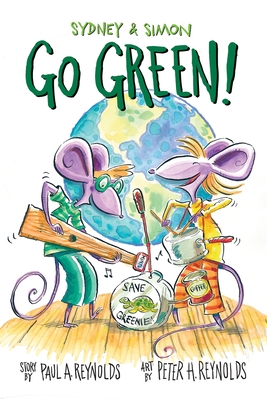 This is book number 2 in the Sydney & Simon series.

Last we saw them, Sydney & Simon used science, technology, engineering, arts, and math skills to save wilting flowers in their window box. Now the twin mice are back to apply STEAM thinking to recycling!

During a class field trip to the Aquarium, Sydney is upset when she realizes that a green sea turtle has been harmed by garbage that made its way to the ocean. She must convince Simon that even if others don’t intend to litter, the garbage everyone puts in a trashcan may accidentally get swept into sewers, streams, rivers, and possibly end up in the ocean.

The twins collects data on the trash habits of their household and school and find they are all part of the problem! They need to figure out a way that their family, their neighborhood, and their school can cut down on garbage production and make better use of their discarded items.

Short chapters paired with Peter H. Reynolds’s lively illustrations will inspire readers to take a closer look at their recycling habits and implement small changes to make a big difference.

Paul A. Reynolds exercises his imagination at FableVision Studios, a media company he founded with his twin brother, Peter. Together they create storytelling technology, such as websites, games, and animated films. Paul is also the author of the children’s book Going Places. He lives in Dedham, Massachusetts, where his wife manages The Blue Bunny, the family’s bookstore.

Peter H. Reynolds learned early on that two minds are better than one. Like his twin, Paul, he believes that the arts help us solve problems and understand the world. Peter has written and illustrated many books for children, including The Dot, Ish, and The Smallest Gift of Christmas. He also illustrates Megan McDonald’s Judy Moody series. Peter lives in Dedham, Massachusetts, where his wife runs an art gallery just across the street from The Blue Bunny.

In their second STEAM-powered exploration (Full STEAM Ahead!, 2014), mouse twins Sydney and Simon investigate the problem of garbage.

Sydney's foray into trash tracking starts with a field trip to the aquarium, where a green sea turtle is recuperating after eating plastic. It doesn't take much of a leap for Sydney to make a connection: "The more trash we make, the more there's a chance that some of that trash could end up in the ocean." The two keep a tally of their family's trash for a week, and the results are eye-opening. Their school is an even larger garbage generator. Ms. Fractalini helps the twins use science, technology, engineering, arts, and math to come up with a way to raise awareness and encourage the community to participate in a solution. A sculpture of Greenie the turtle made out of trash and a song about going green are the start of a communitywide movement to reduce, reuse, and recycle. Along the way, readers will learn lots about decomposition, how quickly garbage adds up, and ways to reduce trash. Ink-and-watercolor-wash illustrations help break up the text and put pictures in readers' heads that will stick with them, making them likely to want to get on the green bandwagon.

Though STEAM is not emphasized as much as it was in the first book, that's not a bad thing, as it helps readers to focus on Sydney and Simon's problem-solving, which they are likely to see as quite doable in their own communities.
-Kirkus Reviews


Sydney meets Greenie the sea turtle during a field trip to the aquarium. Greenie has been harmed by plastic waste that has made its way into the ocean. Sydney returns home and begins to track her family’s trash production. From there, she finds out, with the help of custodian Mr. Clutterbuck, that her school produces an enormous amount of waste. Her campaign inspires an original song as well as a series of major changes in waste management and recycling at the school. In the end, Greenie is ready to be returned to the ocean and Sydney and Simon pledge to help everyone “Go Green!” The highly approachable text is beautifully complemented by Reynolds’s artwork. VERDICT A well-constructed introduction to the dangers facing the environment from human carelessness.
-School Library Journal