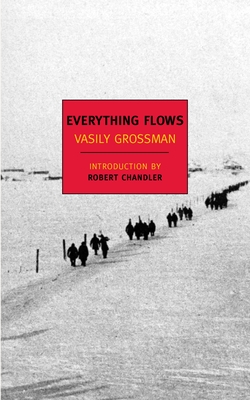 Everything Flows is Vasily Grossman’s final testament, written after the Soviet authorities suppressed his masterpiece, Life and Fate. The main story is simple: released after thirty years in the Soviet camps, Ivan Grigoryevich must struggle to find a place for himself in an unfamiliar world. But in a novel that seeks to take in the whole tragedy of Soviet history, Ivan’s story is only one among many. Thus we also hear about Ivan’s cousin, Nikolay, a scientist who never let his conscience interfere with his career, and Pinegin, the informer who got Ivan sent to the camps. Then a brilliant short play interrupts the narrative: a series of informers steps forward, each making excuses for the inexcusable things that he did—inexcusable and yet, the informers plead, in Stalinist Russia understandable, almost unavoidable. And at the core of the book, we find the story of Anna Sergeyevna, Ivan’s lover, who tells about her eager involvement as an activist in the Terror famine of 1932–33, which led to the deaths of three to five million Ukrainian peasants. Here Everything Flows attains an unbearable lucidity comparable to the last cantos of Dante’s Inferno.

Vasily Semyonovich Grossman was born on December 12, 1905, in Berdichev, a Ukrainian town that was home to one of Europe’s largest Jewish communities. In 1934 he published both “In the Town of Berdichev”—a short story that won the admiration of such diverse writers as Maksim Gorky, Mikhail Bulgakov, and Isaak Babel—and a novel, Glyukauf, about the life of the Donbass miners. During the Second World War, Grossman worked as a reporter for the army newspaper Red Star, covering nearly all of the most important battles from the defense of Moscow to the fall of Berlin. His vivid yet sober “The Hell of Treblinka” (late 1944), one of the first articles in any language about a Nazi death camp, was translated and used as testimony in the Nuremberg trials. His novel For a Just Cause (originally titled Stalingrad) was published in 1952 and then fiercely attacked. A new wave of purges—directed against the Jews—was about to begin; but for Stalin’s death in March 1953, Grossman would almost certainly have been arrested. During the next few years Grossman, while enjoying public success, worked on his two masterpieces, neither of which was to be published in Russia until the late 1980s: Life and Fate and Everything Flows. The KGB confiscated the manuscript of Life and Fate in February 1961. Grossman was able, however, to continue working on Everything Flows, a work even more critical of Soviet society than Life and Fate, until his last days in the hospital. He died on September 14, 1964, on the eve of the twenty-third anniversary of the massacre of the Jews of Berdichev, in which his mother had died.

Robert Chandler’s translations of Sappho and Guillaume Apollinaire are published in the series “Everyman’s Poetry.” His translations from Russian include Vasily Grossman’s Life and Fate, Leskov’s Lady Macbeth of Mtsensk and Aleksander Pushkin’s Dubrovsky and The Captain’s Daughter. Together with his wife, Elizabeth, and other colleagues he has co-translated numerous works by Andrey Platonov. One of these, Soul, was chosen in 2004 as “best translation of the year from a Slavonic language” by the AATSEEL (the American Association of Teachers of Slavonic and East European Languages); it was also shortlisted for the 2005 Rossica Translation Prize and the Weidenfeld European Translation Prize. Robert Chandler’s translation of Hamid Ismailov’s The Railway won the AATSEEL prize for 2007 and received a special commendation from the judges of the 2007 Rossica Translation Prize. Robert Chandler is the editor of Russian Short Stories from Pushkin to Buida and the author of a biography of Alexander Pushkin.

Elizabeth Chandler is a co-translator of Platonov’s Soul and Pushkin’s The Captain’s Daughter.

Anna Aslanyan’s translations into Russian include works of fiction by Mavis Gallant, Zadie Smith, Jonathan Lethem, Rod Liddle, and Ali Smith. She is a contributor to the BBC Russian Service.

"Interspersed with meditations on Russian history, the revolution, and the nature of violence and freedom, Everything Flows is Grossman's great moral reckoning with the crimes of Stalinism." —Daniel Beer, The Wall Street Journal

“A half century after his death, Vasily Grossman's fiction still provides harrowing insight into the legacy of Stalinism, and the historical trauma that continues to fuel ethnic tensions within Ukraine.” —NPR Books

"Vasily Grossman is the Tolstoy of the USSR" --Martin Amis

"After he submitted his masterful World War II novel Life and Fate to a publisher in 1960, the KGB confiscated the manuscript, his notes and even his typewriter (the book was later smuggled out of the country and printed in 1974). But this didn’t quiet Grossman, whose indictments of Stalinist Russia were at least as damning as those of George Orwell and Aleksandr Solzhenitsyn. Understandably bitter over the suppression of his work, the author worked on Everything Flows—a shorter, but even more eviscerating, meditation on the monstrous results of the Soviet experiment—until his death from cancer in 1964. This new translation brings his searing vision to light... Fortunately, the KGB couldn’t keep Grossman’s books under wraps forever. His testament stands as a fitting tribute to the millions of voices that were prematurely silenced."—Drew Toal, Time Out New York

"...a richly-woven narrative of historical events and individual destinies — a masterpiece of pain, moral outrage and gallows humour. Grossman has become recognised not only as one of the great war novelists of all time but also as one of the first and most important of witnesses to the defence of Stalingrad, the fall of Berlin, the consequences of the Holocaust" —Business Standard

A "brilliant and courageous novel...readers will find hope in the narrator's uncommon capacity to forgive and accept."–Library Journal

"Few novels confront human suffering on as massive a scale as this one....Grossman's individual by individual portrayal of anguish gives readers a heartrending glimpse of the incomprehensible. " --Publishers Weekly

"Remarkable...it trembles with the vision of freedom." --Irving Howe, The New York Times

"[I]t is as eloquent a memorial to the anonymous little man in the Stalinist state as Dr. Zhivago is to the artistic spirit in post-Czarist Russia and The First Circle to the scientific intelligentsia." --Thomas Lask, The New York Times

"Grossman traces the blame for the terror of the Stalin years back through Lenin, to the roots of the Russian character, to the mystical national soul that Russians have always considered their greatest strength...Grossman put his finger on the crux of the issue as today's Russians see it: What responsibility do they bear for the horrors perpetrated in the course of Russian and Soviet history?" --Los Angeles Times