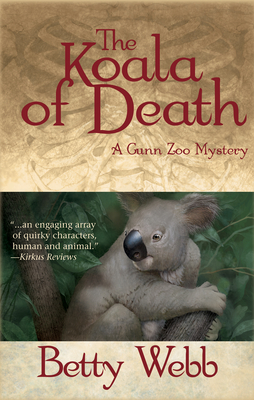 By Betty Webb
$18.99
Not Available In-Store - Usually Ships from Warehouse in 1-5 Days

“Zookeeper Teddy Bentley is back in this delightful second book in the Gunn Zoo mystery series. This time in addition to solving the murder of her fellow zoo keeper, Teddy finds how she has hidden talents as a TV personality. The characters are wonderful and the setting reminds you of your childhood. Can't wait to read more of these!”
— Linda Dewberry, Whodunit? Books, Olympia, WA

When zookeeper Theodora "Teddy" Bentley fishes the body of Koala Kate out of Gunn Landing Harbor, she discovers that her fellow zookeeper didn't drown; she was strangled. The clues to Kate's killer implicate other animal keepers at Gunn Zoo, including Outback Bill, marsupial keeper and Kate's Aussie ex-boyfriend; and Robin Chase, the big cat keeper who's got it in for Teddy. Also displaying suspicious behavior are several "liveaboarders" at the harbor; Speaks-To-Souls, a shady "animal psychic;" and even Caro, Teddy's much-married, ex-beauty queen mother.

But murderers aren't all Teddy has to worry about. Her embezzling father is still on the run from the Feds, and the motor on her houseboat is failing. To pay for the repairs, Teddy agrees to appear on a weekly live television broadcast featuring misbehaving animals that range from a cuddly koala to a panicky wallaby - and all hell breaks loose in the TV studio. All the while, the killer is narrowing in on Teddy....

Before writing mysteries full time, Betty Webb worked as a journalist, interviewing everyone from U.S. presidents and Nobel Prize winners, to the homeless and polygamy runaways. Most of her books are based on the stories she covered as a reporter. Today she's a volunteer at the Phoenix Zoo, and is also a member of the National Federation of Press Women, Mystery Writers of America, the Society of Southwestern Authors, and Women Writing the West.

"Teddy’s second adventure will appeal to animal lovers who enjoy a bit of social satire with their mystery."  -- Booklist

"From mucking out the cages to carrying a lemur with a loose sphincter onto a TV set, Teddy's adventures will appeal to fans of animal-themed cozies." -- Library Journal

“Webb warmly evokes the unconventional worlds of zoo and marina. Readers don't even have to be animal lovers to enjoy watching, say, a pushy television host get her comeuppance from a mischievous lemur.”      — Publishers Weekly