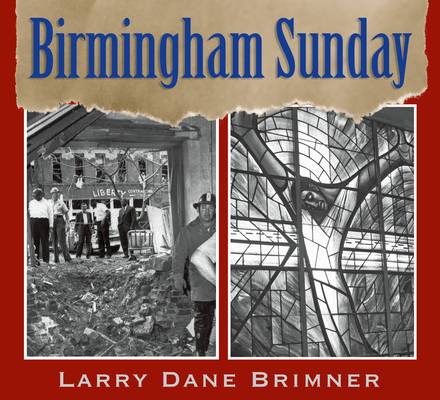 This nonfiction picture book focuses on Birmingham Sunday, a fateful day and significant part of the Civil Rights movement, and places it in historical context.

Racial bombings were so frequent in Birmingham, Alabama that it became known as "Bombingham." Until September 15, 1963, these attacks had been threatening but not deadly. On that Sunday morning, however, a blast in the 16th Street Baptist Church ripped through the exterior wall and claimed the lives of four girls. The church was the ideal target for segregationists, as it was the rallying place for Birmingham's African American community, Martin Luther King, Jr., using it as his "headquarters" when he was in town to further the cause of desegregation and equal rights. Rather than triggering paralyzing fear, the bombing was the definitive act that guaranteed passage of the landmark 1964 civil rights legislation.

Larry Dane Brimner is the recipient of the 2018 Robert F. Sibert Award for the most distinguished informational book for children for his title Twelve Days in May: Freedom Ride 1961. He is known for his well-researched, innovative, and award-winning nonfiction for young readers, and is the author of multiple acclaimed civil rights titles, including Strike!: The Farm Workers' Fight for Their Rights; and Black & White: The Confrontation between Reverend Fred L. Shuttlesworth and Eugene "Bull" Connor.

★ "A standout book for its thorough research and comprehensive look at the incident that led to the 1964 passage of civil-rights legislation. (further reading, author's note, source notes, picture credits)" -- Kirkus Reviews, starred review