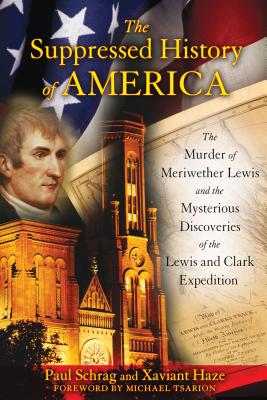 • Provides archaeological proof of giants, the fountain of youth, and descriptions from Lewis’s journals of a tribe of “nearly white, blue-eyed” Indians

Meriwether Lewis discovered far more than the history books tell--ancient civilizations, strange monuments, “nearly white, blue-eyed” Indians, and evidence that the American continent was visited long before the first European settlers arrived. And he was murdered to keep it all secret.

Examining the shadows and cracks between America’s official version of history, Xaviant Haze and Paul Schrag propose that the America of old taught in schools is not the America that was discovered by Lewis and Clark and other early explorers. Investigating the discoveries of Spanish conquistadors and Olmec stories of contact with European-like natives, the authors uncover evidence of explorers from Europe and Asia prior to Columbus, sophisticated ancient civilizations in North America and the Caribbean, the fountain of youth, and a long-extinct race of giants. Verifying stories from Lewis’s journals with modern archaeological finds, geological studies, 18th- and 19th-century newspapers, and accounts of the world in the days of Columbus, the authors reveal how Lewis and Clark’s finds infuriated powerful interests in Washington--including the Smithsonian Institution--culminating in the murder of Meriwether Lewis.

Paul Schrag is an award-winning journalist, novelist, marketing and business consultant, photographer, and musician. He lives in Tacoma, Washington.

Xaviant Haze is a researcher of ancient manuscripts and alternative history, exploring and documenting his findings on lost cities and the myths of the pre-diluvian world. The coauthor of The Suppressed History of America, he lives in Arizona.

“Authors Schrag and Haze teach a fascinating lesson in what we will never be taught but what every American should know.”
— Edward F. Malkowski, author of Sons of God--Daughters of Men, Before the Pharaohs, The Spiritual Tec

“Set against the compelling backdrop of Lewis and Clark’s historic first crossing of the North American continent, The Suppressed History of America breaks new ground and provides interesting food for thought, both for traditional students of American history and for those intrigued by the call of unresolved ancient mysteries.”
— Laird Scranton, author of The Cosmological Origins of Myth and Symbol and The Science of the Dogon

“The Suppressed History of America . . . is a refreshing new addition to the field of the alternative history of the United States. Well researched and written, this book will serve to increase the interest in the full story of the great American explorer Meriwether Lewis. The authors present a cogent argument that Lewis was probably murdered, partly to cover up the profound discoveries he and Clark made in the early nineteenth century.”
— Stephen S. Mehler, author of The Land of Osiris and From Light Into Darkness

“. . . The Suppressed History of America contains all the undertones of a surreptitious political thriller. Encounters with the legendary Mandan Indians who are said to be the descendants of Welsh seafarers and other tribes forever lost to westward expansion speak volumes of what may have been discovered on their journey.”
— Fate Magazine, October 2011

“Enhanced with a wealth of footnote documentation, an extensive bibliography, and a comprehensive index, The Suppressed History of America is a unique and seminal contribution highly recommended for community and academic library collections, as well as the personal reading lists of non-specialist general readers with an interest in American History as it is never taught in public education courses.”
— Midwest Book Review, October 2011

“The Suppressed History of America is a thorough, well-documented, fast-paced exploration of the United States’ greatest mystery and adventure--the Lewis and Clark expedition.”
— Ócháni Lele, author of Teachings of the Santería Gods and The Diloggún