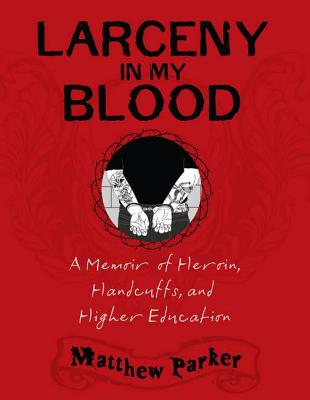 By Matthew Parker
Email or call for price
Out of Print

A fully illustrated graphic memoir of a child of the '60s who was raised into a life of crime and addiction but graduated into freedom.
Matthew Parker was in his mid-forties when he started college. He d been sidetracked: Eleven years were eaten up by serving time in various county jails, state penitentiaries, and federal prison. He d been arrested more than thirty times, racking up eight felonies in a crime career that began at age thirteen, when he started dealing pot. When he got out of prison for the last time and kicked his heroin addiction, he was determined to spend the next chapter of his life in the classroom. And he did just that, going on to complete a master's degree from Columbia University's highly competitive creative writing program.

Through captivating black-and-white illustrations drawn in a distinctively primitive style, "Larceny in My Blood" flashes back on Parker's childhood, with memories of a loving but lawless mother teaching him that breaking the law was the way to survive. From there it moves to an account of Parker's lost decades, where he resorted to petty crime to support a heroin habit. After years of fighting the system, Parker sees the light and "Larceny in My Blood "becomes a poignant portrait of a man trying to find his way in the straight and narrow. A unique memoir, Parker's images and words form a mesmerizing road to redemption.

Matthew Parker recently earned an MFA in creative writing from Columbia University and has been drug- and crime-free since 2002. Born in Bridgeport, Connecticut, he now lives in New York City.

"Matthew Parker's debut, Larceny in my Blood, looks—and reads—lke no memoir I have come across before.  This book—a beautifully balanced mixture of honesty, artistry, and insurgent humor—should be required reading for anyone who has ever struggled with a dangerous habit and found redemption in unbridled creativity. Don't be deceived by the elegant minimalism of the pictures. They are designed to get past your defenses, making the sad moments heartbreaking and the funny moments downright hilarious. Part of the narrative power comes from the economy and emotional precision of the artwork, along with the author's willingness to take readers to places they've never seen, including America's byzantine prison system, which comes across as an almost inescapable maze. Parker is a keen observer of human foibles and unexpected kindnesses. He misses no opportunity to bring his experiences to vivid life, whether he's describing fellow inmates, their shifting alliances and customs, or limning his experiences with fiction, nonfiction and poetry "gangs" at an Ivy League graduate writing program.

As I read through this it felt like I was reading something that was written on the sly and smuggled out to me in the middle of the night. It has that contraband quality that cannot be faked. The story is unflinching,  but  there is a winning element of satire and a genuine love of literature that comes across even in the darker moments, along with an unfailing sense of comic timing."

—Dan White, author of The Cactus Eaters: How I Lost My Mind and Almost Found Myself on the Pacific Crest Trail

“Larceny in My Blood is an unflinching and plain-spoken meditation on the nature of being lost and desperate. It is also proof that the best stories happen to those who can tell them.”
—Beth Raymer, author of Lay the Favorite

“An honest look at addiction, recovery, relapse, relapse, and relapse. Parker explores his bloodline of crime and love with an unwavering and unsentimental eye."
—Annie Choi, author of Happy Birthday or Whatever