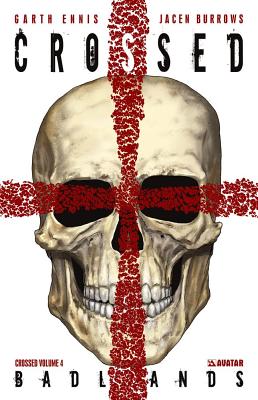 Two tales of terror from the most vicious landscape in modern horror, written by groundbreaking graphic novelists Garth Ennis and Jamie Delano When the worldwide outbreak transforms most of humanity into murderous psychopaths, the uninfected survivors are driven by desperation to the very brink of sanity and morality. In the United Kingdom, a young man devastated by the traumatic death of his wife struggles to survive the roving bands of Crossed at his heels. Meanwhile, three small groups of survivors in the marshy Florida Everglades - haunted by personal demons, driven by primal fears and all-too-human desires - find themselves on a collision course guaranteed to leave bloody, fiery destruction in their wake...

A cornerstone of the modern comic industry, Garth Ennis is most easily recognized as the creator of Preacher, one of the best-selling graphic novel series of all time. His full list of writing credits is nothing short of extraordinary; his career highlights include Judge Dredd, Hellblazer, The Demon, Hitman, Punisher, The Pro, War Story, and The Boys. Over the past ten years, Ennis has published numerous acclaimed and fan-favorite projects through Avatar Press, including Dicks, Chronicles Of Wormwood, 303, Streets Of Glory, and the wildly successful Crossed series. He wrote and directed his first film, Stitched, which Avatar Press will continue as an ongoing comic book series illustrated by Mike Wolfer. Jacen Burrows is truly one of the rising stars in comic book illustration. Working exclusively with Avatar Press through the years, his skillful talents have brought to life the visions of such comic book luminaries as Alan Moore (Neonomicon) and Warren Ellis (Scars). After early collaborations with Garth Ennis on 303, a war story set in Afghanistan, and Chronicles Of Wormwood, a tale of a reluctant, butt-kicking Anti-Christ, he tackled Crossed, defining the look of its bleak world and laying the groundwork for the most successful horror franchise in comics. Jamie Delano is a pioneer of Mature Readers comic storytelling, his reputation cemented as the first person to chronicle the solo exploits of John Constantine in Hellblazer. Among the dozens of gritty, groundbreaking projects under his belt, and prior to his work on Crossed, Delano published two creator-owned series at Avatar Press, Narcopolis and Rawbone. The former is a science fiction epic of one man's rebellion against a bizarre world of twisted authority and chemical influence; the latter is a gut-wrenching horror tale of murderous pirates and damned souls.
My Account • Sign In • Sign Out • Register
NEW & USED BOOKS
AUTHOR EVENTS • GIFTS
Changing Hands Tempe
6428 S McClintock Dr, Tempe, AZ 85283
480.730.0205
[Google Map]
Sun: Closed
Mon-Sat: 11am-6pm