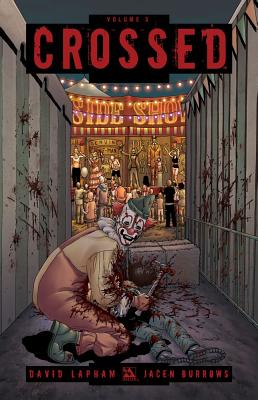 Journey back to the earliest days of the Crossed outbreak, when an outbreak of viral insanity first plunged an unsuspecting world into darkness, in two tales scribed by the masters of modern horror, David Lapham and David Hine In high school, Edmund earned his nickname "Yellow Belly" by running away and hiding whenever confronted by conflicts or fears. But when the Crossed infection ignites at a local circus, when a world of color and delight turns to anguish and misery, perhaps it's that very same cowardice that will save him in the end Meanwhile, a group of self-centered and hedonistic college kids head to a writer's retreat to explore their inner selves... but end up surrounded by berserk killers. What depths will they sink to in order to survive the grinning, gruesome hordes hunting them through the wilderness?

Beginning his career in comic books as a freelance artist in 1990, David Lapham founded El Capitan Books in 1995 exclusively to publish his Eisner Award-winning crime comic book series, Stray Bullets. In recent years, he has worked as a writer for DC Comics, Marvel Comics, IDW Publishing, Dark Horse, and finally Avatar Press, on three Crossed projects (Family Values, Crossed 3D, and Psychopath), Ferals, and Caligula. David Hine is an English writer and illustrator of comic books, contributing memorable stories to some of the most recognizable intellectual properties in comics today. His prior comics work includes such titles as Judge Dredd, Daredevil, Spawn, X-Men, Inhumans: Silent War, Batman: The Joker's Asylum, Spider-Man, The Darkness, and Detective Comics. In 2012, Hine contributed tales to two of the most popular lines from Avatar Press, Crossed and Night of the Living Dead. Jacen Burrows is truly one of the rising stars in comic book illustration. Working exclusively with Avatar Press through the years, his skillful talents have brought to life the visions of such comic book luminaries as Alan Moore (Neonomicon) and Warren Ellis (Scars). After early collaborations with Garth Ennis on 303, a war story set in Afghanistan, and Chronicles Of Wormwood, a tale of a reluctant, butt-kicking Anti-Christ, he tackled Crossed, defining the look of its bleak world and laying the groundwork for the most successful horror franchise in comics.
My Account • Sign In • Sign Out • Register
NEW & USED BOOKS
AUTHOR EVENTS • GIFTS
Changing Hands Tempe
6428 S McClintock Dr, Tempe, AZ 85283
480.730.0205
[Google Map]
Sun: Closed
Mon-Sat: 11am-6pm