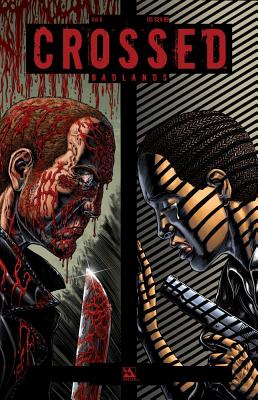 In a volume that spans several eras of Crossed infection, we join three prolific writers each telling a tale set in the horrifying misery of the world during the plague. Simon Spurrier puts us in the mind of a unique Crossed relationship, one which sees lovers from two different worlds as they are driven apart by infection. David Lapham continues fan favorite Crossed Psychopath survivor, Amanda's tale as she fights with the rising insanity in her own mind and a group of lunatic scavengers in "The Livers." And series creator Garth Ennis returns to tell a story so big that it re-defines the way you will see the Crossed. In "The Fatal Englishman" the biggest question in the Crossed universe is answered...how it all begins. Go where other horror survival stories fear to tread and enter the grueling world of the Crossed Trade collects issues #19-28 of the Crossed Badlands series.

A cornerstone of the modern comic industry, Garth Ennis is most easily recognized as the creator of Preacher, one of the best-selling graphic novel series of all time. His full list of writing credits is nothing short of extraordinary; his career highlights include Judge Dredd, Hellblazer, The Demon, Hitman, Punisher, The Pro, War Story, and The Boys. Over the past ten years, Ennis has published numerous acclaimed and fan-favorite projects through Avatar Press, including Dicks, Chronicles Of Wormwood, 303, Streets Of Glory, and the wildly successful Crossed series. He wrote and directed his first film, Stitched, which Avatar Press continued as an ongoing series. Beginning his career in comic books as a freelance artist in 1990, David Lapham founded El Capitan Books in 1995 exclusively to publish his Eisner Award-winning crime comic book series, Stray Bullets. In recent years, he has worked as a writer for DC Comics, Marvel Comics, IDW Publishing, Dark Horse, and finally Avatar Press, on three Crossed projects (Family Values, Crossed 3D, Badlands, and Psychopath), Ferals, and Caligula. Simon Spurrier, a British author of comic books and novels, first began writing professionally in 2001. He contributed extensively to the library of respected UK publisher 2000 AD, including their flagship comic book series Judge Dredd, Harry Kipling, Lobster Random, and The Simping Detective. He also wrote several novels set in the 2000 AD and Warhammer 40,000 story continuities. With the debut of his creator-owned series Gutsville in 2007, Spurrier began to work in the American comic book market, predominantly on such Marvel Comics properties as Silver Surfer, Ghost Rider, and X-Men. In 2011, Spurrier launched a successful web comic through Avatar Press, Crossed: Wish You Were Here, which presents his take on the on the popular horror franchise (CrossedComic.com).
My Account • Sign In • Sign Out • Register
NEW & USED BOOKS
AUTHOR EVENTS • GIFTS
Changing Hands Tempe
6428 S McClintock Dr, Tempe, AZ 85283
480.730.0205
[Google Map]
Sun: Closed
Mon-Sat: 11am-6pm