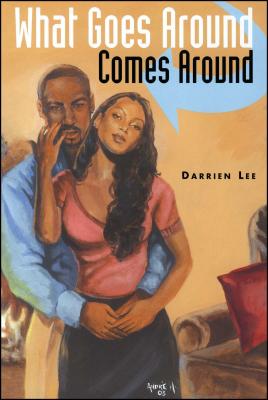 The steamy story of the reunion of a man and a woman who share a past—one that led to a dangerous game of deception.

Winston and Arnelle, the best friends of the beloved characters from Darrien Lee's bestselling books, All That and a Bag of Chips and Been There, Done That, seem to have it all: good looks, professional success, and an irrepressible appeal to the opposite sex. However, in What Goes Around Comes Around readers learn that they share something else—a shocking secret buried deep in their past.

Winston, a dapper young attorney, is king of the conquest. He has bedded so many different women over the years he can barely remember them. However, he finally falls under the spell of a sexy vixen named Arnelle Lapahie, a sports medicine doctor whose office is in the same building as Winston's law firm. While Arnelle finds Winston handsome and tempting, she is hurt that he doesn't remember crossing paths with her years earlier. Arnelle must decide whether she should harp on the past or attempt to make a fresh start with the man of her dreams.

Packed with emotional drama, What Goes Around Comes Around is a fascinating story of two people who must test their ability to forgive, trust, and, ultimately, love.

Darrien Lee, a graduate of Tennessee State University, is a two-time Essence bestselling author. Her books include, All That and a Bag of Chips, Brotherly Love, and What Goes Around Comes Around. She has been featured in several magazines, including Romantic Times magazine and the Nashville Tennessean. She lives in LaVergne, Tennessee, with her husband and two daughters.