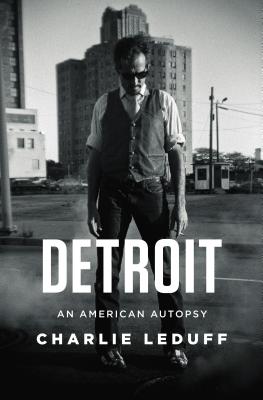 By Charlie LeDuff
Email or call for price
Hard to Find

"A New York Times" Bestseller
A book full of both literary grace and hard-won world-weariness... Iggy Pop meets Jim Carroll and Charles Bukowski "Kirkus," STARRED REVIEW
Back in his broken hometown, Pulitzer Prize winning journalist Charlie LeDuff searches through the ruins for clues to its fate, his family's, and his own. Detroit is where his mother's flower shop was firebombed in the pre-Halloween orgy of arson known as Devil's Night; where his sister lost herself to the west side streets; where his brother, who once sold subprime mortgages with skill and silk, now works in a factory cleaning Chinese-manufactured screws so they can be repackaged as May Be Made in United States.
Having led us on the way up, Detroit now seems to be leading us on the way down. Once the richest city in America, Detroit is now the nation's poorest. Once the vanguard of America's machine age mass production, blue-collar jobs, and automobiles Detroit is now America's capital for unemployment, illiteracy, dropouts, and foreclosures. It is an eerie and angry place of deserted factories and abandoned homes and forgotten people. Trees and switchgrass and wild animals have come back to reclaim their right-ful places. Coyotes are here. The pigeons have left. A city the size of San Francisco and Manhattan could neatly fit into Detroit's vacant lots. After revealing that the city's murder rate is higher than the official police number making it the highest in the country a weary old detective tells LeDuff, In this city two plus two equals three.
With the steel-eyed reportage that has become his trademark and the righteous indignation only a native son possesses, LeDuff sets out to uncover what destroyed his city. He embeds with a local fire brigade struggling to defend its city against systemic arson and bureaucratic corruption. He investigates politicians of all stripes, from the smooth-talking mayor to career police officials to ministers of the backstreets, following the paperwork to discover who benefits from Detroit's decline. He beats on the doors of union bosses and homeless squatters, powerful businessmen and struggling homeowners, and the ordinary people holding the city together by sheer determination.
If Detroit is America's vanguard in good times and bad, then here is the only place to turn for guid-ance in our troubled era. While redemption is thin on the ground in this ghost of a city, "Detroit: An American Autopsy" is no hopeless parable. LeDuff shares an unbelievable story of a hard town in a rough time filled with some of the strangest and strongest people our country has to offer. Detroit is a dark comedy of the absurdity of American life in the twenty-first century, a deeply human drama of colossal greed and endurance, ignorance and courage.

CHARLIE LEDUFF was a staff writer at the "New York Times "and a reporter at the "Detroit News," and is now a television journalist for Detroit s Fox 2 News. He contributed to a Pulitzer Prize winning "New York Times" series and has received a Meyer Berger Award for distinguished writing about New York City. He is the author of "US Guys "and "Work and Other Sins." LeDuff lives with his wife and daughter on the edge of the Detroit city limits.