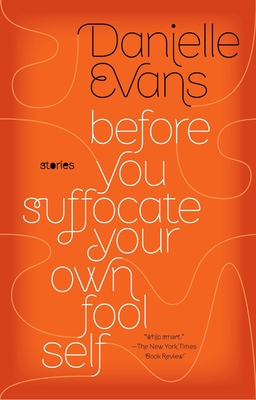 Introducing a new star of her generation, an electric debut story collection about mixed-race and African-American teenagers, women, and men struggling to find a place in their families and communities.

When Danielle Evans's short story "Virgins" was published in The Paris Review in late 2007, it announced the arrival of a major new American short story writer. Written when she was only twenty-three, Evans's story of two black, blue-collar fifteen-year-old girls' flirtation with adulthood for one night was startling in its pitch-perfect examination of race, class, and the shifting terrain of adolescence.

Now this debut short story collection delivers on the promise of that early story. In "Harvest," a college student's unplanned pregnancy forces her to confront her own feelings of inadequacy in comparison to her white classmates. In "Jellyfish," a father's misguided attempt to rescue a gift for his grown daughter from an apartment collapse magnifies all he doesn't know about her. And in "Snakes," the mixed-race daughter of intellectuals recounts the disastrous summer she spent with her white grandmother and cousin, a summer that has unforeseen repercussions in the present.

Striking in their emotional immediacy, the stories in Before You Suffocate Your Own Fool Self are based in a world where inequality is reality but where the insecurities of adolescence and young adulthood, and the tensions within family and the community, are sometimes the biggest complicating forces in one's sense of identity and the choices one makes.

Danielle Evans is a graduate of Columbia University and the Iowa Writers' Workshop. Her stories have appeared in The Paris Review, A Public Space, and The Best American Short Stories 2008.

"Danielle Evans's whipsmart first story collection charts the liminal years between childhood and the condition dubiously known as being a grown-up... Fiercely independent, all of Evans's characters struggle for a place in a world intent of fencing them out. But as her title suggests, the biggest obstacles they face are often their own selves."
-New York Times Book Review

"Whether she's observing people who work at Ruby Tuesday or Harvard students, Evans is a startlingly good sociocultural mimic. Each story shares a particular female voice: tough, pragmatic, knowing, snappy. . . . There are books that capture our world perfectly, like a scrim over a stage. And then there are books that surprise the audience and go somewhere new, somewhere completely unpredictable. In this collection, Evans paints a picture, sometimes ripping through the fabric. One wonders where she will go next."
-The Boston Globe

"Danielle Evans' blisteringly smart short stories offer fresh perspective on being young and black in America. From a vandalizing valedictorian to a rejected biracial child, her characters triumph by surviving without forgetting."
-Time

"Stories about the trade-offs of early adulthood from a new writer with a fresh, appealing voice... Many of these eight wonderfully melancholy stories mostly set along the East Coast deal with loss-of family, of love, of innocence-and all explore the chasm between what others see and who we really are...Most of Evans' characters are African American, but she doesn't dwell on race, focusing instead on the transitory awkwardness inherent in young adulthood. Readers will understand her characters' mistakes long before they've been made-and recognize that when we have to choose, it is rarely our better selves who win."
-People (4 stars)

"The most vivid characters in Danielle Evans's story collection are in- betweeners: between girlhood and womanhood; between the black middle class and Ivy League privilege; between iffy boyfriends and those even less reliable; between an extended family and living on your own. To say they're caught between worlds isn't quite accurate, though; they tend to be hard-headed, sadder but wiser and, most of all, funny."
-The New York Times

"This striking debut collection Before You Suffocate Your Own Fool Self offers rich slices of African-American life... [Evans's] stories are bolstered by memorable images... Evans's book, meanwhile, carries a strong scent of freshness and promise."
-Entertainment Weekly

"Lit's new It Girl. Critics raved about Danielle Evans's talent solely based on 'Virgins' her bold coming-of-age story...Before You Suffocate Your Own Fool Self, her eagerly awaited first collection, proves them right. [Evans] will win you over with eight thoroughly modern, funny and tender stories."
-Essence

"Danielle Evans's considerable talents are in evidence on every page of this impressive debut. She finds her often surprising dramatic material in the unexpected asides of modern life, with results that are intense, intelligent, humane, and funny. I look forward to reading more."
-Daniel Alarcon, author of Lost City Radio

"Evans's knife-sharp wit and tender but unflinching eye create a range of characters who are entirely sympathetic, even as they tumble headlong into their own mistakes."
-V.V. Ganeshananthan, author of Love Marriage

"Danielle Evans is funny as hell. Which only makes all the heartbreak in these stories more surprising and satisfying. The young women in this collection are always on the edge of real trouble but don't be fooled, they're the dangerous ones. Written with wonderful clarity and a novelist's sense of scope, Before You Suffocate Your Own Fool Self is a fabulous literary debut."
-Victor LaValle, author of Big Machine

"Danielle Evans's stories are fresh, arresting, real. The young women and men in them could be sitting across from you on the subway or strolling past you on a college campus. And the young woman who brings them to us is a writer to watch."
-Martha Southgate, author of The Fall of Rome

"Quietly magnetic, Evans's voice draws us into richly-charged worlds where innocence isn't lost but escaped, and where pieces of the past reassemble in the present with the inevitable geometry of kaleidoscope glass. Delivered with a light touch that belies their maturity, these morally complex stories mark the arrival of a gifted new author."
-Sana Krasikov, author of One More Year

"Armed with no easy answers but plenty of bad choices, the talented, too-smart- for-their-own-good protagonists are painfully aware of the consequences of their actions, even when they think they have no better choice. . . . The moral ambiguity of Evans's achingly believable world finds its best expression in the devastating final story, 'Robert E. Lee is Dead,' in which the brainy black cheerleader, CeeCee, jeopardizes her own high-school graduation with a pointless act of vandalism. Although she is instigated by her closest friend Geena, whose future is less bright, CeeCee's decision is her own. She shares this characteristic with the other survivors in this arresting book, along with the regret. A welcome new talent-with a funny and dark take on being black in America."
-Kirkus (starred)